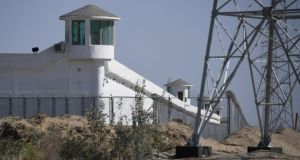 A high-security facility near what is believed to be a re-education camp where mostly Muslim ethnic minorities are detained, on the outskirts of Hotan, in China’s northwestern Xinjiang region. File photograph: Greg Baker/AFP via Getty

As China faced rising international censure last year over its mass internment of Muslim minorities, officials asserted that the indoctrination camps in the western region of Xinjiang had shrunk as former camp inmates rejoined society as reformed citizens.

Researchers at the Australian Strategic Policy Institute (ASPI) last week challenged those claims with an investigation that found that Xinjiang authorities had been expanding a variety of detention sites since last year.

Rather than being released, many detainees were likely being sent to prisons and perhaps other facilities, the investigation found, citing satellite images of new and expanded incarceration sites.

Nathan Ruser, a researcher who led the project at the institute, also called ASPI, said the findings undercut Chinese officials’ claims that inmates from the camps – which the government calls vocational training centres – had “graduated”.

“Evidence suggests that many extrajudicial detainees in Xinjiang’s vast re-education’ network are now being formally charged and locked up in higher security facilities, including newly built or expanded prisons,” Ruser wrote in the report.

The Chinese government has created formidable barriers to investigating conditions in Xinjiang. Officials tail and harass foreign journalists, making it impossible to safely conduct interviews. Access to camps is limited to selected visitors, who are taken on choreographed tours where inmates are shown singing and dancing.

The researchers for the new report overcame those barriers with long-distance sleuthing. They pored over satellite images of Xinjiang at night to find telltale clusters of new lights, especially in barely habited areas, which often proved to be new detention sites.

A closer examination of such images sometimes revealed hulking buildings, surrounded by high walls, watchtowers and barbed-wire internal fencing – features that distinguished detention facilities from other large public compounds like schools or hospitals.

“I don’t believe this timing is merely coincidental,” Timothy Grose, an associate professor of China studies at the Rose-Hulman Institute of Technology, who was not involved in the ASPI project, said of the accumulating evidence of expanding incarceration sites.

“In my opinion, we are witnessing a new stage in the crisis,” he said. “Some detainees have been released, others have been placed in factories, while others still have been sentenced.” China has repeatedly refused to disclose the number of detention sites and detainees in Xinjiang and elsewhere.

ASPI researchers found and examined some 380 suspected detention sites in Xinjiang. At least 61 of them had expanded in area between July 2019 and July of this year, and of those, 14 were still growing, according to the latest available satellite images.

The researchers divided the sites into four security levels, and they said that about half of the expanding sites were higher-security facilities. The researchers found signs that some reeducation camps were being rolled back, partially confirming government claims of a shift. At least 70 sites had seen the removal of security infrastructure such as internal fencing or perimeter walls, and eight camps appeared to be undergoing decommissioning, they wrote. The facilities apparently being scaled back were largely lower-security camps, they said.

Under Xi Jinping, the Chinese leader, authorities have carried out a sweeping crackdown in Xinjiang, with as many as a million or more people incarcerated in recent years, according to scholars’ estimates. The ASPI report was issued one day after the sixth anniversary of a key moment in the increasingly harsh campaign, the sentencing of Ilham Tohti, a prominent Uighur scholar, to life in prison.

Late last year, Shohrat Zakir, chairman of the Xinjiang government, told reporters in Beijing that the reeducation sites were now housing only people who were there voluntarily, and that others who had been in the facilities had “graduated.” Where to, he did not say.

The ASPI report builds on previous investigations that also pointed to explosive growth in the prison population in Xinjiang over recent years, even as the building of indoctrination camps appeared to peak. Last month, BuzzFeed News found 268 detention compounds in Xinjiang built since 2017. The news organization identified the compounds with the help of spots blanked out of the online mapping service from Baidu, the Chinese technology company.

An investigation by the New York Times last year found that courts in Xinjiang – where Uighurs and other largely Muslim minorities make up more than half of the population of 25 million – sentenced 230,000 people to prison or other punishments in 2017 and 2018, far more than in any other period on record for the region.

Official sentencing statistics for 2019 have not been released. But a report released by authorities in Xinjiang early this year said that prosecutors indicted 96,596 people for criminal trial in 2019, suggesting that the flow of trials – which almost always lead to convictions – was lower than in the previous two years, but still much higher than in the years before the crackdown took off.

“Even though the internment camps are obviously the most headline-grabbing aspect of what’s happening, there’s been a much broader effort from the beginning that has also included significant incarceration” in prisons, said Sean R Roberts, an associate professor at George Washington University and author of The War on the Uyghurs: China’s Campaign Against Xinjiang’s Muslims. (Uyghur is another spelling for Uighur.)

Uighurs who have left China often struggle to find out what has happened to family members who were detained, and possibly tried and imprisoned. Still, growing numbers of Uighurs abroad report having learned of relatives being sentenced to prison terms of 5, 10 or even 15 years on sweeping charges like “separatism”, said Elise Anderson, a senior program officer for research and advocacy with the Uyghur Human Rights Project, a group based in Washington, who is involved in an unfinished study of incarceration in Xinjiang.

“In some cases, people don’t even know what’s happened and have to guess,” Anderson said. Sayyara Arkin, a Uighur woman living in the United States, said she waited years for news of her brother, Hursan Hasan, a well-known actor in Xinjiang who was taken into a reeducation camp in 2018. Earlier this month, her family in Xinjiang told her that Hasan had been sentenced to 15 years in prison on charges of separatism, Arkin said by telephone.

“I felt shocked,” Arkin said. “He’s an actor who focused on his work, an intellectual who had the acceptance of the government, and I never imagined this would happen.”

The United States has begun to take a more confrontational stance toward China over the repression in Xinjiang. This year, the Trump administration has imposed sanctions on officials responsible for policy in the region, as well as the Xinjiang Production and Construction Corps, which is both a farm conglomerate and a quasi-military security institution. It has also imposed restrictions on imports of clothing, hair products and technological goods from Xinjiang, but stopped short of banning all cotton and tomatoes, two of the region’s key exports.

This week, the House of Representatives passed legislation that would bar any imports from Xinjiang unless they were proven not to have been produced using forced labour.

The Chinese government initially denied reports of mass detention in Xinjiang, and later defended the indoctrination camps, describing them as benign places that provide job training and counter religious extremism and terrorism. In a white paper released last week, Beijing defended its labour policies in the region, saying that it observed international labour and human rights standards and that its work was a successful example of governance in “underdeveloped areas with large populations of ethnic minorities.”

“Its passion lies in concocting and sensationalising anti-China topics,” Wang Wenbin, a spokesman for the Chinese Ministry of Foreign Affairs, told reporters in Beijing on Thursday, when asked about the new report. He noted that ASPI received funding from the US government. “Imbued with ideological prejudice,” Wang added, “it is practically an anti-China vanguard.”

ASPI says that its research is independent and not influenced by its funding sources. Some Uighur exiles have argued that the Chinese government’s crackdown in their homeland amounts to genocide.

Earlier this month, a group of watchdog groups and experts issued a joint letter that said China’s policies in Xinjiang “meet the threshold of acts constitutive of genocide,” a crime brought into international law after the second World Wa, as well as other possible crimes against humanity.

The Chinese government has angrily rejected such claims. And the continued growth of detention sites across Xinjiang suggests that authorities are determined to transform and subdue Uighur society for generations to come.

“The Chinese government potentially could keep up this regime of intense repression for a significant amount of time,” said Roberts of George Washington University. “It could essentially destroy the Uighur identity as we know it inside China.” – New York Times