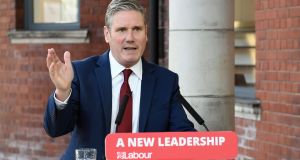 Keir Starmer’s Labour now has a three-point lead over the Conservatives, according to the latest Opinium poll. Photograph: AFP via Getty Images

Keir Starmer’s Labour now has a three-point lead over the Conservatives, according to the latest Opinium poll for the Observer newspaper. In a result that will stir more unrest among Tory MPs over the performance of the prime minister, the poll put Labour on 42 per cent support, with the Conservatives on 39 per cent.

It is the first Labour lead since early July 2019 – the end of Theresa May’s doomed premiership, when the Lib Dems and the Brexit Party were polling strongly. Labour then recorded a two-point lead.

This poll represents a rapid reversal. The Conservatives recorded a 26-point lead only six months ago, in the early stages of the Covid-19 lockdown. Approval of government handling of coronavirus then stood at two-thirds (65 per cent) of the public. The latest poll shows only 30 per cent now approve.

Mr Starmer now leads Mr Johnson by four points on who would make the best prime minister. More than half of voters (55 per cent) believe he is ready to be prime minister, and 40 per cent believe Labour is ready to form the next government.

The underlying polling results suggest that government failings have contributed to Labour’s lead. Mr Starmer’s approval ratings are very similar to those recorded in an Opinium poll a fortnight ago, but Mr Johnson’s approval ratings have dropped since then from -6 per cent to -12 per cent, his lowest since the pandemic began.

The Lib Dem party has seen no bounce from the announcement of new leader Ed Davey – it is on 5 per cent, down one point from a fortnight ago.

Adam Drummond, associate director of Opinium, said: “The Labour Party has finally caught up with its leader in polling. While this is the first time since Boris Johnson became prime minister that Labour has been ahead of the Conservatives on vote share, Keir Starmer has had better approval ratings (both raw and net) than the prime minister for some time and the two leaders have tended to draw on the question of who would be the better prime minister. Now the Labour leader has pulled ahead on that measure as well.

“While there is strong public support for the new Covid restrictions announced by the government earlier this week, they have not yet resulted in the sort of boost to the government’s approval rating that the initial lockdown measures brought in March, suggesting that the ‘rally around the flag’ effect was a one-off.”

He said the result gave “some credence to those who argue that perceptions of the party leaders are a leading indicator, and that where approval ratings go, vote share follows”. He added: “While Labour spent most of the 2010-15 parliament with a lead over the Conservatives, Ed Miliband generally trailed David Cameron on approval ratings and preferred prime minister. This suggests that Labour’s vote share under Mr Starmer is a little more solid - and is why the other really interesting set of numbers to watch over the next few months will be Rishi Sunak’s.” – Guardian