Collins Dictionary word of the year for 2020 revealed 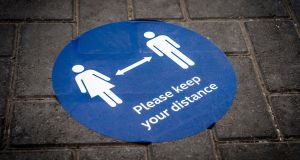 Collins chose lockdown as the word of 2020 because it is “a unifying experience for billions of people” across the world. Photograph: iStock

In a dispiriting reflection of where we’re all at, lockdown has been designated word of the year by the Collins Dictionary.

It takes a lot to unite the world in terms of what concerns people, and one thing that can be said for Covid-19 is that it has affected most of the planet – which is reflected in how we use language. The dictionary’s lexicographers chose lockdown – the containment measure used by governments across the world to mitigate Covid-19’s spread – because it is “a unifying experience for billions of people” across the world.

Collins monitors its 13-billion-word corpus and creates an annual list of new and notable words that reflect the ever-evolving English language and the preoccupations of those who use it. It registered more than a quarter of a million usages of the word lockdown during 2020, against only 4,000 the previous year.

In choosing word of the year, others that could have made the top spot include coronavirus, social distancing, self-isolate, furlough or key worker, all of which are included in the dictionary’s longer list of 10 words of the year. Key worker has had a 60-fold increase in usage, reflecting the importance of essential jobs in society.

The list includes words reflecting other significant developments in 2020. The abbreviation BLM was often used as a social media hashtag, as well as in conversation and reporting following the murder of George Floyd in the US in May and subsequent protests. Collins registered an increase in usage of BLM by 581 per cent, representing new awareness of the Black Lives Matter movement, founded in 2013.

Among new words thrown up this year by social media are TikToker – someone who shares content on the TikTok video-sharing app – and mukbang, a phenomenon originating in South Korea where a host of a video or webcast eats large quantities of food to entertain viewers, while broadcasting to followers.

Megxit also makes the cut, referring to Harry and Meghan quitting the royals in January 2020; the word plays on Brexit, which was Collins’ word of the year in 2016, a marker of how firmly established it is in the lexicon.

Collins’ language content consultant Helen Newstead, talking about how language reflects the world around us, said they chose lockdown because the shared experience of billions restricting their daily lives to contain the virus “has affected the way we work, study, shop, and socialise. With many countries entering a second lockdown, it is not a word of the year to celebrate but it is, perhaps, one that sums up the year for most of the world”.

BLM: abbreviation, for Black Lives Matter – a movement that campaigns against racially motivated violence and oppression.

coronavirus: noun, any one of a group of RNA-containing viruses that can cause infectious illnesses of the respiratory tract, including COVID-19; so called because of their crown-like appearance in electron micrographs

furlough: noun, a temporary laying-off of employees, usually because there is insufficient work to occupy them; verb (tr) to lay off (staff) temporarily. from Dutch verlof, from ver- for- + lof leave, permission; related to Swedish förlof

key worker: or keyworker, noun, an employee in any of a number of professions considered to be essential to the functioning of society, for example teachers, police officers, health workers, shop workers, etc

lockdown: noun the imposition of stringent restrictions on travel, social interaction, and access to public spaces.

mukbang: noun, a video or webcast in which the host eats a large quantity of food for the entertainment of viewers; Korean, from meogneun eating + bangsong broadcast.

self-isolate: vb (intr), to quarantine oneself if one has or suspects one has a contagious disease; self-isolation, noun.

social distancing: noun, the practice of maintaining a certain distance between oneself and other people in order to prevent infection with a disease. Also called: physical distancing; social distance or socially distance, verb

TikToker: noun, a person who regularly shares or appears in videos on TikTok.