America has never recovered from its cold war victory

US Politics: The fall of the Berlin Wall left US citizens free to argue amongst themselves 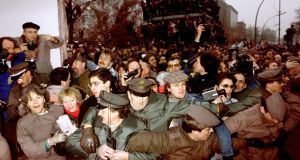 East and West German Police contain the crowd of East Berliners flowing through the recent opening made in the Berlin Wall at Potsdamer Square in Berlin, on November 12th, 1989. Photograph: Patrick Hertzog/AFP via Getty Images

It took more than the deliverance of millions from the Berlin Wall to move George HW Bush. “I’m just not an emotional kind of guy,” said the 41st US president, as Germans made short work of local masonry 30 Novembers ago. Some of this was the reticence of a Wasp in his 60s. Some of it was tact in the face of a volatile Moscow.

Looking back, there was another reason for Americans to curb their euphoria. They had just been deprived of more than they had gained.

Less discussed is what the US itself lost on that day. It lost a unifying enemy. As long as the country was menaced from outside, there was a natural limit on its internal squabbles. It was unpatriotic to take domestic politics too far. Once there was no threat, or even competition, Americans were safe to argue among themselves with abandon.

Partisanship did not begin with the fall of communism. But it did attain a new virulence. Nothing has done more to divide the nation than its unassailability in the world.

In 1990, a congressman from Georgia called Newt Gingrich circulated a memo among Republicans calling for harsher language in politics. By 1994, he was running the Capitol. Of the last five supreme court justices confirmed before 1989, not a single US senator voted against four. Since then, no addition to the bench has commanded unanimity. Within weeks, in all likelihood, there will have been more presidential impeachments in the last two and a bit decades than in the previous two centuries.

History does not allow for control experiments. We cannot know the state of US politics in a world where the wall still stands and a communist empire glowers behind it. All we have to go on is the record, and it shows an unmistakable spike in rancour at the turn of the 1990s.

The writer Peter Beinart described Bush as the last “legitimate” president. While voters refused him a second term, none treated his presence in high office as an affront to the republic. Of his successors, three have been accused by their opponents of military duty-shirking, one of extra-American birth and one of being installed by judges rather than voters.

Perhaps there was an unaccountable change in White House candidates circa 1992 that justified this animus. But it is likelier that freedom from external menaces turned Americans on each other. No president since 1988 has won 400 electoral college votes. No Democrat has swept the South. No Republican has dominated the coasts. There has been no “national” president since the cold war.

At the risk of bathos, there is an episode of The Simpsons in which Homer is sent to hell’s Ironic Punishment Division. Having craved doughnuts all his life, he is force-fed nothing else. Unipolarity was America’s ironic punishment. It had spent half a century wishing for the demise of its one meaningful rival. It ended up with too much of what it wanted. The more secure and commanding the US grew, the more it had only itself to worry about. The inward turn was for the worse.

The mistake is to assume that China will reverse it. I used to believe that fear of Beijing would replace fear of Moscow as America’s binding agent. But then I remembered how many expected the same of radical Islam.

China is more or less capitalist. It does not abut or threaten a nation as familiar to Americans as Germany. It does not believe that its way of life is theoretically exportable to all of humankind. It is irreligious but then so (compared to the cold war era) is much of the US. Unless we resort to notions of racial otherness, is there enough here for Americans to define themselves against? Do not be sure.

The Soviet empire was America’s favourite enemy: the one that gave it the securest sense of itself. When the wall fell, so did a certain kind of US nationhood. The partisanship that followed will endure until the next worthy ogre comes along.

It is as though hatred obeys the first law of thermodynamics. Like energy, it can be transferred but never destroyed. The less of it a nation directs outward, the more it must channel at home. America’s victory in the cold war was a feat of strategy and patience that should be saluted this weekend. It just happens to be a victory from which it has never recovered. – Copyright The Financial Times Limited 2019

1 Coronavirus: Donnelly ‘cautiously optimistic’ about Dublin
2 Man with electric scooter who died in Meath was due to get married in the coming weeks
3 ‘Entirely wrong’ to remove pandemic payment from students, says Sinn Féin leader
4 Traffic volumes show Donegal locking down to greater extent than Dublin
5 Hospitality industry suffers another blow as New Year’s Eve festival is cancelled
Real news has value SUBSCRIBE