Hundreds of thousands ordered to flee as hot, dry winds expected through Tuesday 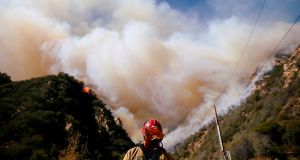 Firefighters battle the Woolsey Fire as it continues to burn in Malibu, California, on Sunday. Photograph: Reuters

Authorities searched on Monday for more than 200 people unaccounted for in one of the wildfires rampaging through parts of California, voicing concern about a possible rising death toll, with gusty, dry winds expected to fan the flames.

The so-called Camp Fire, California’s most destructive on record, had left at least 228 people missing as of early Monday, according to Kory Honea, sheriff of northern California’s Butte County, site of the fire. That fire and one in southern California have killed at least 31 people.

Both fires have been whipped up by hot dry winds expected to continue through Tuesday evening, according to officials. The winds were expected to heighten the risk of fresh blazes ignited by scattered embers. More than 224,000 people have been displaced by the fires, officials said.

The Camp Fire, 60km north of Sacramento, burned down more than 6,700 homes and businesses in the town of Paradise, more structures than any other wildfire recorded in California. The blaze has probably caused between $2 billion (€1.8 billion) and $4 billion in insured property damage, Morgan Stanley estimated in a report on Monday.

The fire had scorched more than 113,000 acres and was 25 per cent contained, officials said on Monday. Its death toll of 29 equals that of the Griffith Park Fire in 1933, the deadliest wildfire on record in California.

Speaking on CNN, Mr Honea said that while he held out hope that many people listed as missing would turn up safe, “given what we’ve dealt with so far with casualties as a result of this fire, I have concerns that it [the death toll] will rise”.

In southern California, the Woolsey Fire had burned more than 91,000 acres and was 20 per cent contained, officials said. The fire had forced authorities to issue evacuation orders for a quarter of a million people in Ventura and Los Angeles counties and beachside communities including the Malibu beach colony. By Sunday night parts of the two counties were reopened.

At least two people have died in the Woolsey Fire, according to officials from the statewide agency Cal Fire, which has more than 3,200 personnel fighting the blaze. The number of people missing in the Woolsey Fire was not immediately available.

Many of those allowed to return were left without power or a mobile phone service, even if their homes were spared by the flames.

A smaller blaze in southern California, the Hill Fire, was 75 per cent contained and had burned 4,531 acres, officials said.

Wind gusts of up to 100km/h were expected in the mountains, valleys and canyons of southern California, raising the possibility of downed power lines and trees. This, in combination with low humidity, was expected to create the perfect conditions for fires to spread.

Local residents were despondent over the fire damage.

“It’s not the house, because you can rebuild. But it’s what is inside the house. It’s all gone,” Malibu resident Marcella Shirk (82) told KABC-TV. “And that’s what hurts, those kinds of things hurt, because you can’t replace that.” She and her husband lost their house of 41 years and its possessions. The house burned on his 92nd birthday.

Governor Jerry Brown, a Democrat, has asked US president Donald Trump to declare a major disaster to bolster the emergency response and help residents recover. Mr Trump, a Republican who has often criticised Democrat-led California on a variety of issues including immigration enforcement, blamed the state government in Twitter comments during the weekend, criticising poor forest management by the state for the infernos.

Brian Rice, president of the California Professional Firefighters, called Mr Trump’s statement “ill-timed” given the loss of life and ongoing search for missing people. “You can’t just make a blanket statement,” Mr Rice told MSNBC on Monday, adding that fires and forest management were complicated and that weather also was a major factor.

1 Q&A: How long could it take to form a new government after Election 2020? Could things get messy?
2 Cardiologist saved by paramedics after heart attack at Dublin Airport
3 Two Irish passengers on cruise ship test positive for coronavirus
4 Mediterranean diet fuels bacteria that may reduce old-age frailty
5 Body part found on Donegal beach by person out walking
Real news has value SUBSCRIBE