Unity and disorder emanate from Armistice commemoration in Paris

Some 70 world leaders gather at the Arc de Triomphe in Paris for a solemn ceremony to mark the 100th anniversary of the end of first World War. Video: Reuters 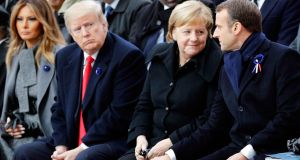 This was the image that the world would remember, President Emmanuel Macron said: 84 heads of state and government and international organisations marching up the Champs-Élysée in the rain, some holding hands, to mark the centenary of the armistice that ended the first World War.

“What remains uncertain is how this image will be interpreted in the future,” Macron said when he opened the Paris Peace Forum in the afternoon. “Will it be the bright symbol of a lasting peace between nations? Or, on the contrary, the photograph of a last moment of unity, before the world sank into a new disorder?”

Three leaders refused to ride in the buses that ferried the world’s leaders from the Élysée Palace to within 50m of the Arc de Triomphe, ostensibly for security reasons: Donald Trump, Vladimir Putin and Binyamin Netanyahu. By arriving alone, they seemed to signal that they represented the new rogue states, who have no desire to sign up for Macron’s goody-goody peace team.

The French are fascinated by everything about Trump, including the two “beasts”, one a decoy, which were flown from the US for his two-day visit to Paris. NBC television reported that the armoured black Cadillacs cost $1.5 million (€1.3 million) each, weigh nine tonnes and carry blood in the mini-bars, in case the US president needs a transfusion.

On Saturday, the exhaust pipe of the “beast” filled the courtyard of the Élysée with choking white smoke when it came to fetch the Trumps from their lunch with the Macrons.

On Sunday, Trump’s convoy headed up the Champs-Élysées before Macron and his guests. Three militants from the Femen organisation jumped over the railing and raced towards the vehicles. Two were arrested immediately. A third almost reached Trump’s Cadillac before she was wrestled away by gendarmes. The women wrote the words “Hypocrisy parade”, “Gangsta party” and “Fake peacemakers” on their bare breasts.

Trump apparently waited in a side street until the other leaders were seated. In the meantime, the solemn, symbolic moment of the 11th hour of the 11th day of the 11th month, when the armistice entered into force, was missed. While church bells pealed, the world leaders were still making their way up the avenue in a bus.

Trump and Russian president Vladimir Putin made an entrance by being the last to arrive at the ceremony. Macron greeted the US president and first lady more coldly than in the past. Despite tension over Trump’s renunciation of a key arms control treaty, the American and Russian leaders shook hands warmly and appeared to agree to a later meeting with a thumbs-up.

Trump showed no expression as he listened to a translation of Macron’s speech through an ear-piece. The US leader sat in the front row with his legs spread wide apart, wearing his sempiternal red tie and hunched over, elbows on his knees.

Much of Macron’s speech was clearly aimed at Trump. In its most patriotic hours, Macron said, France believed in universal values “exactly the opposite of a people who consider only their own interests. For patriotism is the exact opposite of nationalism. Nationalism is the betrayal of patriotism. When one says, ‘Our interests first and the others don’t matter!’ one erases what is most precious in a nation . . . its moral values.”

The moving ceremony balanced French pride, including two renditions of the Marseillaise and the regalia of the Republican Guards and the Saint-Cyr military academy, with a display of multiculturalism that also felt like a rebuke to Trump.

Yo Yo Ma, the American cellist born in Paris of Chinese parents, sat beside the flame to the Unknown Soldier as he played Bach’s Sarabande from Cello Suite no. 5.

Angélique Kidjo, a singer from Bénin, West Africa, wore a sumptuous blue and gold African gown and turban as she sang a song of gratitude titled Blewu in the Mina language. One wondered if the impassive Trump recalled his description of African nations as “shithole countries”.

In another example of openness and tolerance, students from the suburb of Seine Saint Denis read texts written by American, Chinese, English, French and German people who were affected by the war, in the language in which they were written.

After lunch at the Élysée Palace, most of Macron’s guests travelled to La Villette, in northern Paris, for the opening session of his first annual Peace Forum.

Trump skipped the peace forum to travel to the US cemetery in Suresnes, west of Paris, where more than 1,500 American “Doughboys” from the first World War are buried. On Saturday, Trump had cancelled a trip to the cemetery at Belleau Wood, where marines fought a famous battle in 1918, because it was raining. A grandson of Winston Churchill said Trump was “pathetic” and unfit to represent the US.