World leaders gathered in France where Trump led through inarticulation

President Elect Michael D Higgins leads the State commemoration at Glasnevin Cemetery in Dublin to mark the centenary of the ending in 1918 of the first World War. Video: Áras an Uachtaráin, Irish Defence Forces 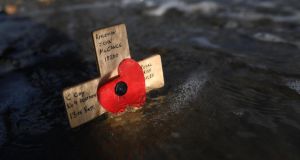 The tide washes away a remembrance cross is planted in the sand as volunteers drew depictions of those killed in World War One, part of Danny Boyle’s Pages of The Sea celebrations, on Murlough Beach in Newcastle, Northern Ireland on November 11th Photograph: Clodagh Kilcoyne/Reuters

Eighty-four heads of state and government and international organisations met in Paris on Sunday to commemorate the 100th anniversary of the end of the first World War.

But though much of the rhetoric was about peace, ideological battle lines were drawn during the ceremony at the Arc de Triomphe and the opening of the three-day Paris Peace Forum.

Us President Donald Trump cut a lonely figure amid so much high-mindedness, but his only speaking engagement, a 10-minute speech at the US cemetery at Suresnes, west of Paris, was so inarticulate that it was difficult to discern what, if anything, the president stood for.

Ireland was represented by Leo Varadkar. In an interview before the ceremony at the Arc de Triomphe, the Taoiseach laid to rest the old debate about Berlin and Boston, casting the lot of the Republic with Macron, Merkel and Gutterres.

Asked what were the greatest threats to Europe and Ireland, Mr Varadkar said; “On a political level, it’s the potential breakdown of multilateral order, the one that emerged from the horrors of the first World War and the second World War, and the fact that people are really questioning the value of institutions like the United Nations, the World Trade Organisation, a return to the ideas of protectionism, nationalism and in some places the ugly side of that which is xenophobia and racism.”

In the past, Mr Varadkar said, such feelings “ended in war. It ended in tens of millions of deaths and we need to make sure that doesn’t happen again.”

In contrast to Mr Trump, who cancelled a trip to a US war cemetery in Picardy on Saturday because it was raining, Mr Macron spent the previous week visiting the battlefields of the first World War.

“During those four years, Europe nearly committed suicide,” Mr Macron said. “Mankind sank into the hideous labyrinth of merciless confrontation, into a hell that swallows up all combatants, whatever side they are on, whatever their nationality . . . ”

Mr Trump delivered a history lesson for beginners about “a horrible, horrible war, but a war known as the Great War”.

Mr Macron vividly described “the still grey and sterile earth of the battlefields” and “mass graves where the bones of German and French soldiers who killed each other for a few metres of terrain lie side by side.”

The European Union and the United Nations, unmentioned by Mr Trump, represented hope to Mr Macron.

The EU had delivered Europe “from endless civil wars” while he saw the UN as “the guarantor of a spirit of co-operation.” If leaders “put peace above all” they could “fight global warming, poverty, hunger, illness, inequality and ignorance together.”

Today’s leaders will carry a “historic responsibility” if they destroy hope by turning inward and by choosing violence and domination, Mr Macron said.

Mr Trump conveyed no depth of feeling, no sense of gravitas or history. Much of his speech was comprised of lists of American men in the audience: top military brass, congressmen and second World War veterans.

He said “thank you” 33 times, calling out their names individually.

Mr Trump skipped the Peace Forum, so he didn’t hear the UN Secretary General warn of “an invisible chain of events” that reminded him of the 1930s.

Nor did he hear Dr Merkel saying she feared that “blinkered nationalism” threatens the “European peace project” born after the second World War. “The peace we take for granted is far from being assured, and we must fight for it.”