Greece to follow Croatia and Montenegro in opening borders for tourists 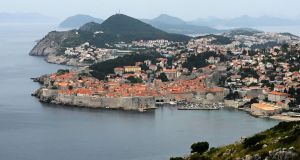 Dubrovnik: Croatia is hoping, like its neighbour Montenegro, to capitalise on its relatively low virus numbers to salvage the 2020 tourist season. Photograph: Denis Lovrovic/Getty

Croatia has opened its borders to citizens from 10 European Union states, and Greece has announced plans to accept visitors from 29 countries from mid-June, as competition for tourists begins ahead of a coronavirus-affected summer season.

The surprise decision from Croatia came days after neighbouring Montenegro announced that it was entirely free of coronavirus, and was ready to welcome tourists from 10 countries with low rates of infection from June 1st.

Visitors to Croatia from the selected states – Germany, Austria, Czech Republic, Slovakia, Poland, Hungary, Slovenia, Estonia, Latvia and Lithuania – will have to provide contact details for their stay either online before arrival or at a border crossing.

Veljko Ostojic, the head of the Croatian tourism association, said the “crucial” move demonstrated that “Croatia is one of the first countries in the European Union to send a clear message from the highest level that it is open to tourism”.

“As of now, 231 hotels and 86 campsites have opened, and all leading tourist firms have announced the opening of additional capacity in the coming days,” said Mr Ostojic, adding that safety measures had been implemented according to World Health Organisation advice.

Like Greece further south, Adriatic neighbours Croatia and Montenegro rely on tourism for about a fifth of their gross domestic product, and they are eager to capitalise during peak season on their relatively low rates of the Covid-19 virus.

“Our aim is to be able to welcome every tourist who has overcome their fear and has the ability to travel to our country,” Greek tourism minister Harry Theoharis said on Friday.

“We are opening up, but at the same time we are closely monitoring the situation. Strict health protocols will protect both staff and tourists.”

Greece announced that from June 15th it would open its borders to visitors from 22 European countries and China, Japan, South Korea, Australia, New Zealand, Israel and Lebanon. Neither Ireland nor Britain is included on the list, but Athens said it would be reviewed and probably extended on July 1st.

Tourists will be allowed to fly into Athens and Thessaloniki airports and will be subject to random coronavirus tests, while hotels must observe restrictions on capacity and stringent hygiene rules.

Countries further north which appear to have the coronavirus outbreak under control have started to ease travel rules: Hungary, Slovakia and the Czech Republic this week opened their borders to each other’s citizens for visits of not more than 48 hours, and Estonia, Latvia and Lithuania have allowed free movement within their “Baltic travel bubble” for the last fortnight.

Officials in several countries have said they would like all members of the EU’s “passport-free” Schengen zone to drop most border controls on June 15th, potentially giving a summer boost to popular tourist destinations such as Italy and Spain, which have been hard hit by the pandemic.

Poland, Romania, Bulgaria and Ukraine are among countries that will ease lockdown restrictions in the coming days, and on Friday restaurants, bars and cafes in the Hungarian capital Budapest were allowed to reopen indoor areas to guests.

“This new distribution system is an absurd and perverted solution, because it gives more to the rich than the poor,” he said.

“I don’t dismiss it out of hand, although my instincts make me sceptical,” he added. “They want to take out this loan for 30 years, so even our grandchildren may have to pay for it. We need to think carefully about whether we as a country want this or not.”