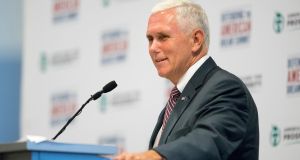 Governor Mike Pence of Indiana: his grandfather, Richard Michael Cawley, emigrated to the US from Tubercurry, Co Sligo. Photograph: the New York Times

Mr Pence’s grandfather, Richard Michael Cawley, emigrated to the US from Tubercurry, Co Sligo. He passed through the immigration station at Ellis Island in New York on April 11th, 1923. Growing up, Mr Pence was reportedly close to his grandfather, who worked as a bus driver in Chicago.

On their visit, the Pences visited the house where Mr Pence’s great-grandfather, James Maloney, was born, and they met his grandmother’s first cousin, then 92-year-old Patrick Moloney.

The newspaper later reported that the Irish visit “left a lasting impression” on Mr Pence, “who as a member of Congress sought looser immigration restrictions than many of his fellow conservatives liked”.

It remains to see whether the second- generation Irish-American politician, who comes from a family of Irish Catholic Democrats, could, if picked to be Mr Trump’s vice-presidential candidate, soften his hardline immigration stance.

1 Why Sinn Féin will not call the State by its name
2 Spread of coronavirus triggers European travel curbs
3 What evidence is there that the IRA still controls Sinn Féin?
4 Brazilian father to be deported days after daughter’s birthday
5 Divisive Leitrim rape case raises questions about future trials
Real news has value SUBSCRIBE