Migrants have a ‘far better’ life in detention, says Trump 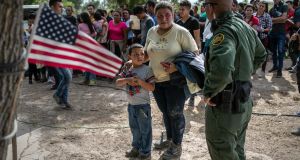 A Border Patrol agent speaks to immigrants after taking them into custody on Tuesday in Los Ebanos, Texas. Photograph: John Moore/Getty Images

US president Donald Trump has said that migrants were “living far better” in Border Patrol detention centres than in their home countries, one day after his own administration reported that children in some facilities were denied hot meals or showers, and that cells were so crowded that migrants begged to be freed.

In a series of posts on Twitter, Mr Trump criticised Democrats who this week visited Border Patrol facilities in Texas, and reported that migrants had been forced to drink from a toilet. Customs and Border Protection officials have disputed that claim.

“Many of these illegal aliens are living far better now than where they came from, and in far safer conditions,” Mr Trump said over multiple tweets. “No matter how good things actually look, even if perfect, the Democrat visitors will act shocked & aghast at how terrible things are.”

Mr Trump’s statements followed weeks of public backlash over allegations about the care of migrants who are held in Border Patrol facilities. Last month, a team of lawyers who spoke to migrants at a holding centre in Clint, Texas, said children did not have access to soap or showers. The Democratic lawmakers said the asylum seekers were kept in cells without running water and slept on concrete.

On Tuesday, the department of homeland security’s inspector general backed some of those findings in a report on conditions in detention centres in the Rio Grande Valley. It warned that overcrowding in the facilities posed an “immediate risk” to Border Patrol agents and migrants, and said some of the asylum seekers had desperately tried to escape.

But on Wednesday, the Department of Homeland Security released an annual court-ordered report that contradicted some of the claims made by the inspector general and the Democratic lawmakers.

.....came from, and in far safer conditions. No matter how good things actually look, even if perfect, the Democrat visitors will act shocked & aghast at how terrible things are. Just Pols. If they really want to fix them, change the Immigration Laws and Loopholes. So easy to do!

Henry Moak jnr, chief accountability officer for Customs and Border Protection, who interviewed more than 60 minors at multiple facilities from June 2018 to May 2019, said the agency delivered an “extraordinary” response given the increase in migrants.

“In general, minors received regular meals and snacks; had access to drinking water, functioning toilets and functioning sinks; were held in rooms with adequate temperature control and ventilation; and had access to emergency medical assistance if needed,” he said in the report, which was required as part of a federal court settlement that sets standards for the detention, treatment and release of migrants who are minors. “The facilities were safe and sanitary.”

Still, the report noted that many migrants did not receive showers or cots or beds to sleep on. Some toilets were broken, but Mr Moak said agents were quick to fix them.

In Wednesday’s tweets, the president suggested that migrants seek an alternative if they took issue with the centres. “If Illegal Immigrants are unhappy with the conditions in the quickly built or refitted detentions centers, just tell them not to come,” Mr Trump said. “All problems solved!”

A record number of asylum-seeking families, many fleeing persecution, violence or poverty in Central America, have filled facilities along the southwestern border that were built to only briefly hold adults before they were deported.

The Trump administration has tried to deter the immigration surge by raising fees on asylum applications, limiting the daily number of migrants who can apply for asylum at ports of entry and forcing more than 13,000 migrants to return to Mexico to wait for the outcome of their asylum cases.

In April, the administration also tried to deny bond hearings to migrants who illegally entered the United States, which would have kept them in jail until their immigration cases were resolved. The justice department’s order was blocked on Tuesday by a federal judge in Seattle.

In a statement on Wednesday, the White House said the Seattle ruling was “at war with the rule of law”. “The decision only incentivises smugglers and traffickers, which will lead to the further overwhelming of our immigration system by illegal aliens,” the statement said.

After touring the Clint facility, Democratic lawmakers demanded answers about the migrants’ treatment from Customs and Border Protection, with Representative Alexandria Ocasio-Cortez calling it a “rogue agency.”

Senator Chuck Schumer, the Democratic leader, on Wednesday called for the firing of Mark Morgan, the acting commissioner of Customs and Border Protection, who was appointed last week to lead the agency.

Mr Schumer criticised Customs and Border Protection for the findings in the government report. He also excoriated the agency over a secret Facebook group of former and current Border Patrol agents that featured jokes about migrant deaths and obscene images of members of Congress.

“The horrid conditions CBP has subjected children and families to at the border are nothing short of inhumane and downright inexcusable,” Mr Schumer said in a statement. “Too much of CBP has been an out-of-control agency for too long, and it must be reined in immediately.” – New York Times