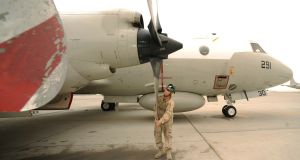 Pre-flight propeller inspection: a US navy EP-3 aircraft had to take evasive action to avoid crashing into a Chinese fighter jet that suddenly pulled up in front of the American plane in contested skies above the East China Sea on Sunday, the Pentagon said.

Regional tensions over China’s sovereignty claims over most of the surrounding oceans have increased after two fighters “buzzed” a US EP-3 surveillance plane in international airspace between the East China Sea and the Yellow Sea, near the Korean peninsula.

US navy captain Jeff Davis said the Chinese fighters operated dangerously during the encounter, in which the American pilot took evasive action to avoid a crash.

Chinese defence ministry spokesman Ren Guoqiang described the manoeuvres of the two J-10 fighters as “legal, necessary and professional” and said the US should stop these “unsafe, unprofessional and unfriendly military activities”.

Vietnam said it stopped drilling for gas in a disputed part of the South China Sea near the Spratly Island chain following strong threats from China.

Oil and gas resources and fishing rights are central to the ongoing rows in the South China Sea, which is one of the world’s busiest maritime regions and dotted with reefs and islets.

Foreign ministry spokesman Lu Kang did not comment directly on Vietnamese claims of pressure from Beijing, but he told a regular news briefing: “China urges the relevant party to cease the relevant unilateral infringing activities and with practical actions safeguard the hard-earned positive situation in the South China Sea.”

In the Spratly Islands, China has built seven man-made islands on reclaimed land at three locations – the Subi, Mischief and Fiery Cross reefs. It has built a 3,000 metre-long airstrip that can handle bombers and missile batteries for what Beijing says are defensive purposes.

In a sign of how China is further entrenching its presence in the Paracels south of the Spratlys, more than 200 Chinese soldiers and residents were able to watch a propaganda movie about an inspiring Communist Party cadre, The Eternity of Jiao Yulu, on Woody Island after the launch of a cinema on land also claimed by Vietnam and Taiwan.

The US has also been securing its presence in the region, and President Donald Trump this week approved a plan to allow the US navy more freedom to carry out patrols there, a move that is sure to anger Beijing.

China has been wooing its neighbours in an effort to outweigh US influence in the region.

Foreign minister Wang Yi has described the situation in disputed areas of the South China Sea as “trending toward stability”, partly due to his country’s improved relations with the Philippines.

Since President Rodrigo Duterte came to power last year, he has adopted a much less robust approach to Manila’s territorial disputes with China as he tries to revive economic ties.

Bilateral relations became chilly after Mr Duterte’s predecessor Benigno Aquino III challenged Beijing’s ambitions to control vast swathes of the South China Sea in the permanent court of arbitration in The Hague. The court ruled in favour of the Philippines and against China.

Mr Wang, who is visiting Manila, made a barbed reference to US influence in the region.

“If there are still some non-regional forces in the region, they don’t want to see stability in the South China Sea, and they still want to stir up trouble, we need to stand together and say ‘No’ to them together,” he said.