As Trump’s swearing in approaches, finally bipartisan consensus: It’s time to flip out 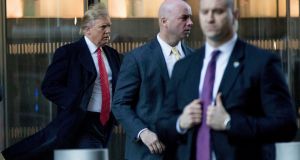 President-elect Donald Trump with Secret Service: “I spent months never believing that he would be elected president,” said one Democrat. “I sincerely hope that the office makes the man.” Photograph: AP/Andrew Harnik

President Donald Trump will walk into the Oval Office and be stunned. First, it will be a shock to work in an office decorated with images of men other than himself. Second, he is bound to be suffused with awe as he looks around at the Remington bronze bronco, the Rockwell “Statue of Liberty”, the portraits of Washington and Lincoln, the Swedish ivy on the mantel that has eavesdropped – and leaves dropped – on so much history.

Donald Trump will, at long last, assume a mantle of dignity.

The capital has never been more anxious about its own government. The town is suffering pre-traumatic stress disorder. This guy is really going to be president. Finally, there is bipartisan consensus: It’s time to flip out. Decades after duck-and-cover was a way of life, people here are once more in duck-and-cover mode. No one knows what is going to happen, but they know it will be utter chaos and that the old familiar ways have vaporised.

Closed-door confabs in mahogany and marble rooms with brass spittoons have been replaced with Trump heckling, pouting, demanding and sharing his innermost thoughts on Twitter. The city has the panicked air of a B-horror movie where the townsfolk stand stock still, bug-eyed and frozen, too frightened to flee, waiting for the creature.

Everything is turned inside out into sauerkraut. Democrats are appalled that Trump is challenging the CIA, the same agency that got WMDs wrong. Republicans are cuddling up to Russia. Mitch McConnell says the American people will not tolerate the Democrats’ holding up a supreme court nominee. WikiLeaks is protesting against leaks. Trump and Sean Hannity suddenly love Julian Assange.

The city’s mood is “surreal”, as Sen Dick Durbin told the New York Times’s Carl Hulse on The Run-Up podcast. As the Illinois Democrat looks down from his Capitol Hill office at the inaugural stands going up, he is still in disbelief that it’s not Madam President and that the Democrats didn’t scoop up the Senate.

“I spent months never believing that he would be elected president,” Durbin said. “I sincerely hope that the office makes the man.”

House Republicans, who had to back off their attempt to eviscerate the independent ethics office after the president-elect tweeted his disapproval of their priorities, looked dazed as they walked out of their party conference meeting at the swift power of the Trump thunderbolt-tweets.

Can you imagine what would have happened if a president-elect Barack Obama had called McConnell “a clown”, as Trump tweeted about Schumer? Can you imagine a scenario where two Republicans in a row lose the popular vote but win the White House with a shady helping hand? Can’t the GOP win fair and square? Was it the Russians who turned Wisconsin, Michigan and Pennsylvania truly red?

As Congress officially certified Trump’s election Friday at the US Capitol – “It is over,” Biden firmly told Democrats who had still been yearning for the miracle of a recount or redo – the intelligence services were meeting with Trump and essentially decertifying his election.

For Trump, every humiliation is a small death. So you know he was furious about the searing report – reflecting rare unanimity by the turf-battling intelligence agencies – implying that he did not win on his own, given that Putin ordered up a cyber-campaign designed to “denigrate” Hillary and help Trump.

McCain called it “an act of war”. It’s certainly the biggest Russian conspiracy to hit Washington since Kevin Costner’s No Way Out. Outsiders in a corrupt political establishment meddled in the US election by painting Trump as an outsider victimised by a corrupt political establishment. Russia tried to rig our election in favour of Trump even as Trump was decrying a rigged election.

The intelligence report ascribed a motive: “Putin has had many positive experiences working with western political leaders whose business interests made them more disposed to deal with Russia, such as former Italian prime minister Silvio Berlusconi and former German chancellor Gerhard Schröder.”

Back in 1987, I interviewed Trump when Mikhail Gorbachev made his first visit to the US. Trump was very suspicious of the Evil Empire then and warned that the US should not be too eager to make a deal with Gorbachev. But then the Soviets invited him to a business round-table and softened him up by telling him they loved Trump Tower and inviting him to build a hotel in Moscow.

A year later, Trump heard that Gorbachev was back, out in front of Trump Tower. He rushed down from his office to shake hands with the communist, who turned out to be an impersonator from New Jersey named Ronald Knapp.

Trump was easily fooled that time. It remains an open question how gullible and malleable he is. But those in Washington, such as Mike Pence, Reince Priebus and Paul Ryan, who think they can manipulate him might be in for a surprise.