Death toll in Brazil reaches 100,000 while the United States records over 160,000 fatalities 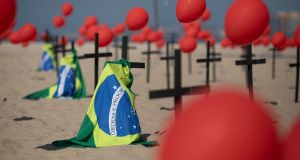 Crosses, red balloons and Brazilian nation flags on Copacabana beach in a demonstration organised by Rio de Paz to honour the victims of Covid-19. Photograph: AP

Australia’s second-most populous state, Victoria, reported its deadliest day of the Covid-19 outbreak on Sunday, with 17 people dying, as police thwarted a planned anti-mask rally in the capital of Melbourne.

Victoria, at the centre of a second wave of infections in Australia, reported 394 cases of the novel coronavirus in the past 24 hours, compared with a daily average of 400-500 over the past week. The additional deaths bring the state’s total to 210.

On Saturday the official death toll hit 100,000 – up from 10,000 in early May. A similar number of lives were lost during Sri Lanka’s 26-year civil war or the ongoing conflict in Yemen. Brazil has recorded more than three million infections – second only to the US.

Belgium’s authorities said on Sunday that 617 more people have been infected with coronavirus in the past 24 hours, versus 768 the day before. Four more deaths were reported, bringing the total number of fatalities to 9,870. Several coastal towns banned one-day visitors on Sunday after scorching heat drove scores of Belgians to the beaches the day before.

Masks will be mandatory outdoors from Monday on the busiest streets of Paris, including the most tourist-heavy areas, according to local authorities. The spread of the virus accelerated last week in France, infecting increasingly younger people. Industry minister Agnes Pannier-Runacher said the government started a programme to distribute free masks to those in need and without resources. The scientific council advising the government said wearing masks outdoors will eventually become the norm and called on the 20 biggest cities to prepare for a potential new wave of confinements.

The number of confirmed coronavirus cases in Germany increased by 555 to 215,891, data from the Robert Koch Institute for infectious diseases showed on Sunday. The reported death toll rose by one to 9,196, the tally showed.

At the same time, the reproduction factor – or R value –, a lagging indicator, rose to 1.32 on Saturday, the highest in three weeks, meaning 100 infected people are estimated to spread the disease to about 132 others. Local authorities may again turn stricter following local outbreaks among harvest workers, at a canning company, and among returning travellers near the end of the summer break.

The United States set a record for coronavirus cases on Saturday, with more than five million people now infected, according to a tally, as the country’s top infectious diseases official offered hope earlier this week that an effective vaccine might be available by year end. With one out of every 66 residents infected, the United States leads the world in Covid-19 cases, according to a Reuters analysis.

The country has recorded more than 160,000 deaths, nearly a quarter of the world’s total.

India recorded a single-day spike of 64,399 cases, bringing the case load over 2.1 million on Sunday, according to the health ministry.

The Chinese health authority said it received reports of 23 new confirmed cases on the mainland on Saturday, including 15 that were locally transmitted, according to Xinhua news agency. All local cases were reported in Xinjiang Uygur Autonomous Region, said the National Health Commission, according to the news agency. No deaths related to the disease were reported Saturday, said the commission.

New Zealand marked 100 days without a domestic transmission of the coronavirus on Sunday, but warned against complacency as countries like Vietnam and Australia which once had the virus under control now battle a resurgence in infections. New Zealand’s successful fight against Covid-19 has made the Pacific island nation of five million one of the safest places in the world right now.

Hong Kong reported 72 new coronavirus cases on Sunday, of which 63 were locally transmitted, as authorities continued efforts to contain a resurgence of infections in the global financial hub over the past month. More than 4,000 people have been infected in Hong Kong since January, 51 of whom have died. Sunday’s figure was slightly up from Saturday’s 69 cases.

Vietnam’s health ministry on Sunday reported 31 new Covid-19 cases and an additional death, taking the country’s total tally to 841, with 11 fatalities. All of the new cases are linked to the central city of Danang, where the new outbreak began late last month, said the ministry of health.

Coronavirus has been detected at a second mine in Papua New Guinea, after an employee at the Lihir Mine owned by Newcrest Mining Ltd tested positive for the disease. The 30-year-old male, who flew in from Port Moresby at the end of July, is among 26 confirmed cases reported on Sunday by the National Pandemic Control Centre in the capital Port Moresby.