Soldier kills 26 in Thailand shooting spree and dies in standoff 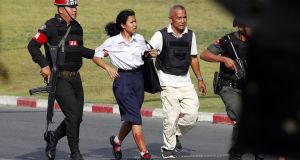 Soldiers evacuate a woman from the scene of a mass shooting at the Terminal 21 shopping mall in Nakhon Ratchasima, Thailand. Photograph: EPA/RungroJ Yongrit

A soldier armed with an assault rifle went on a shooting rampage at a military base and a shopping mall in Thailand on Saturday, killing at least 26 people, wounding 57 and posting video on Facebook Live.

The gunman’s lengthy standoff with authorities ended Sunday morning when a raid led to a flurry of gunfire that killed him. He died more than 12 hours after arriving in a stolen Humvee from a military base where he had shot and killed a superior officer.

The shooting in Korat – a commercial hub for agriculture in Thailand’s poorest region – stunned officials; one said the gunman “went mad”, creating an extended horror that turned a busy seven-story shopping centre into a labyrinth of fear.

Security camera footage from the mall showed a young man in camouflage walking past shops with a long gun. Reports from inside described frantic shoppers fleeing, hiding in food court kitchens and behind cash registers, holding their breath and silencing their phones.

“I was really terrified. At that moment, I could not think about anything,” said Kul Kaemthong, a mall cleaner who rushed into a room in the fourth-floor food court with about 40 other people to hide before emerging hours later. “When we heard a gunshot, everybody started running for our lives.”

The shooting and the lengthy siege ended at 9am on Sunday. In a country of 69 million people with more than 10 million guns, authorities have been concerned for years about gun violence. Thailand has one of the highest gun homicide rates in Asia, and the episode in Korat comes just a month after a gunman killed three people at a mall in the central Thai city of Lopburi.

The violence started nine miles away, on a military base, at about 3pm on Saturday. Defence Ministry spokesman Lt Gen Kongcheep Tantravanich said the gunman, Sgt Jakkrapanth Thomma “shot and killed his superior officer” at Suthampitak army base in Nakhon Ratchasima province. “He also shot and injured military officers,” he added.

He then stole a Humvee, shooting at random along his route before entering the mall with several firearms, including an automatic rifle. Thailand’s prime minister, Prayuth Chan-ocha, said on Sunday that the gunman was enraged over a “land problem”, in particular a dispute over a fee payment involving the selling of a house.

A Facebook page believed to be connected to Thomma included comments and images suggesting a grudge involving money. “Getting wealthy from cheating and taking advantage of others,” he said in a comment on the page. “Do they think they can take their money to use in hell?” The page also showed an image of a young man Saturday wearing a helmet. “I’m tired now,” he said at one point. “I can’t move my finger anymore.” The Facebook page was taken down soon after.

Facebook said the suspected gunman’s Facebook and Instagram accounts were both removed. The company said it had identified a short, live video posted by the suspected gunman, but a spokeswoman, Sarah Pollack, said it had found no evidence that the violence was streamed on Facebook Live. The company said it was still looking into when the gunman’s video was streamed, adding that it would move to block others from posting the gunman’s video, as well as anyone posting videos that depict the violence or support it.

In Korat, the operation to apprehend the gunman lasted more than 12 hours. Shortly after 8pm, the police declared the gunman a most-wanted person and urged the public to call in with any information about him.

Of the 57 who were injured, at least four sustained serious injuries, the public health minister, Anutin Charnvirakul said, adding they were undergoing surgery early on Sunday. At one point early on Sunday, gunshots could be heard from inside the mall. As the siege continued, the area around the mall in Korat was cordoned off amid fears that many hundreds of people were trapped inside. Video showed steady streams of people, many carrying small children, fleeing the mall with the help of police and soldiers.

Dozens of orange-clad emergency workers set up triage areas near the mall, tending to victims and helping the rescued. Relatives and friends of those believed to be still inside anxiously awaited word of their fate even as they heard a burst of gunfire from inside the mall.

Patcharin Khlairit said she had exchanged messages with her brother, who was trapped along with his wife in the mall’s basement level. “The latest message I received from him was there’s a commando team that are helping them escape through the fire stairs,” she said. – New York Times