Greece Letter: The wartime virtues of the Greeks have become problems in peacetime 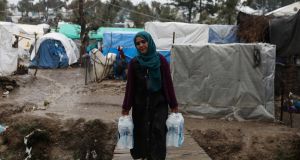 A temporary camp for refugees and migrants next to the Moria camp on the island of Lesbos. Photograph: Elias Marcou/Reuters

“A country with a rather poor tradition in crisis management and faced with a demographic crisis, tough economic obligations, chronic failures of the state apparatus, a dysfunctional educational system and a problematic mindset in multiple areas.” Not my words, but those of Alexandros Diakopoulos, Greece’s national security adviser.

Diakopoulos sees “national security” in terms not only of terrorism, or the ongoing struggle with Turkey, but also of economic, social and environmental stability. So much of what he says is valid, while so much of it is debatable.

During the second World War, Andre Michalopoulos, the minister of information of the Greek government in exile, spoke of “The spirit of the Greek people, a spirit of proud and uncompromising independence. We are a race of law-abiding men and women, and we don’t like to be bullied.”

Greeks, Michalopoulpos said, are characterised by “patriotic fervour, deep religious faith and mystical belief in the destiny of Greece, combined with stubbornness, courage and endurance”.

In some ways the wartime virtues and strengths of the Greeks have become peacetime problems. Greece may have systemic faults that are almost ineradicable: the passion for independence and the embrace of honour and dignity do not sit well with globalisation, austerity and homogenisation.

This time around, bullying by the International Monetary Fund and the EU had Greek governments cowering. But not the Greek people. What was true of resistance against the Nazis is true also of today’s young Greeks, but their voices and enthusiasms are seldom recognised.

Michalopoulos was far-seeing in his idea of a Europe “eliminating trade barriers and pooling political assets”, based on the “closest financial and economic collaboration”. If he were alive today (he died in 1982, just after Greek accession to Europe), what would he think of the EU?

He could foresee not only the need for a borderless Europe but one that depended on the guarantees of Britain, the US, Russia and China for world peace. This scenario is evaporating today before our eyes, and the EU lacks the political clout or the ethical determination to protect its weakest members.

There has been disingenuous bravado from Europe, with outgoing EU leaders congratulating themselves on the dubious success of keeping Greece within the euro zone. And there has been multiple hand-washing by politicians such as former prime minister Costas Simitis in his shameful book The European Debt Crisis (2012) in which everyone is to blame except himself. In the same vein we saw the self-serving arrogance of finance minister Yanis Varoufakis.

Centre-left Syriza (2015-2019) was well-meaning but riddled with indecision and immaturity, while the present government, New Democracy, is founded on elitism and self-satisfaction. These are the Scylla and Charybdis of Greek politics, between which young entrepreneurs cannot find the way.

The areas where Greece is weakest are in manufacturing and financial services – precisely the areas that helped Ireland to recover from its own crisis in similar circumstances. Taxation punishes, rather than encourages, the private sector, which leads to emigration of both talent and enterprise.

Greece is almost at the bottom of the EU league for “ease of doing business”, so foreign investment is deterred. In foreign affairs Greece is powerless to aid the Greeks of Cyprus in their struggle against Turkish invasion of their land and their oil- and gas-rich seas – a conflict soon to spread to Greece’s own waters.

The insistence of the EU and the IMF on reforms of which Greece is not capable highlights a fundamental problem: that the systemic differences between mindsets and cultures have not been understood.

A century ago Greece suffered a humiliating defeat at the hands of the Turks in what is known as the “Anatolian Catastrophe”. When the current refugee crisis began, islanders in Lesbos and Chios recalled that their grandparents had been refugees themselves, and in their turn sheltered the new wave of incomers.

They were acclaimed – even nominated for the Nobel Peace Prize. Over the years that welcome has evaporated as Europe seems unwilling to share the burden of the homeless and destitute. Once again Greece feels ignored and even betrayed by the international “community”.

Greece’s own weaknesses have been compounded by those of the international community, while its strengths have been largely ignored. Nowhere is this more glaring than in the country’s only viable major industry – tourism. And tourism, for lack of planning and co-ordination, is a shambles. As the nation’s strongest profile, it is in danger of turning a mercenary and, ultimately counter-productive face towards its strongest markets.

With development of niche markets, industry training and intelligent marketing, Greece’s tourism industry could replicate what Michalopoulos saw as the country’s greatest strengths. But, in Diakopoulos’s terms, the “problematic mindset” of the state apparatus will keep it between a rock and a hard place.