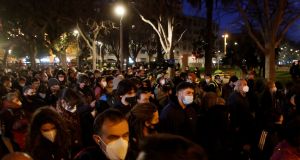 Several hundred protesters have marched in the Spanish city of Barcelona against a crackdown which followed a violent outcry over the imprisonment of Pablo Hasel, an anti-establishment rapper.

The march took place amid a heavy police presence, winding through several avenues of the Catalan regional capital.

Protesters walked behind a banner that called for the release of Hasel and his jailed supporters.

The rapper is serving nine months for inciting terrorism – having praised two now-defunct armed groups responsible for killing more than 900 people in Spain – and for refusing to pay a fine for insulting Spain’s former king.

His arrest on February 16th triggered a mix of peaceful and violent protests that have at times ended in the looting of shops in several cities.

The case has also invigorated a debate over the limits of freedom of speech in Spain.

The ruling left-wing coalition has pledged to launch a legal reform to eliminate prison terms for offenses involving freedom of speech.

The coalition’s junior partner, the far-left United We Can party, has filed a petition to pardon Hasel.

Eight people have been held on suspicion of being part of a group that protested against the rapper’s imprisonment by setting fire to a police van, with one officer narrowly escaping the flames.