Maureen Dowd: Cohen’s pathetic fate should be a warning for Republicans 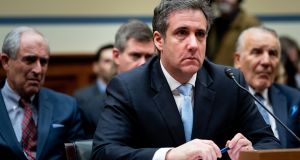 First there was Ivana. Then there was Marla. Now comes trouble in paradise with Kim.

Last fall, Trump cooed that the North Korean dictator wrote him “beautiful letters” and “we fell in love”, but then the US president cancelled their lunch date following their disappointing rendezvous in Hanoi.

Yet all the crazy tabloid splits and international spats seem pallid in comparison to the pathetic spectacle in Congress on Wednesday: a heartbroken ex publicly and bitterly processing his relationship with Trump.

This time, it wasn’t just lust, betrayal and secrets splayed across Page Six. This time, it was in Congress, part of an investigation that could lead to legal jeopardy for the Trumps or impeachment for the president.

In his testimony, Michael Cohen called himself a “fool” when it came to Trump. “I ignored my conscience and acted loyal to a man when I should not have,” Cohen said. A fool for love, held in thrall by Trump. How could anyone be held in thrall by such a sleazy goofball, much less offer to take a bullet for him or make 500 threats on his behalf?

“It seems unbelievable that I was so mesmerised by Donald Trump that I was willing to do things for him that I knew were absolutely wrong,” said Cohen in his Goodfellas accent, adding that being around the “icon” was “intoxicating”.

Actually, Trump is simple, grasping for money, attention and fame. The enigma about Trump is why he cut off his lap dog so brutally that Cohen fell into the embrace of Robert Mueller and New York federal prosecutors. Trump is often compared to a mob boss, but Michael Corleone would never turn on a loyal capo, only on one who had crossed him.

The portrait Cohen drew of Trump was not surprising. It has been apparent for some time that the president is a con man, racist, cheat and liar. (See: Jared Kushner security clearance.)

What was most compelling about the congressional hearing was the portrait it drew of the sadistic relationship between the sycophant and the sociopath.

Cohen told the House of Representatives oversight committee that working for Trump had made him feel that he was “involved in something greater than yourself – that you were somehow changing the world”.

Threatening to sue people and take away their livelihoods or ruin their reputations isn’t exactly Greenpeace or Doctors Without Borders. But Cohen was chugging Trump Kool-Aid. He saw himself as Trump’s protector, the thug’s thug.

In late 2017, he appeared to get misty while talking to Vanity Fair’s Emily Jane Fox about Trump: “One man who wants to do so much good with so many detractors against him needs support.” He vowed he would never walk away from Trump, no matter what. A year ago, he even shopped around a book that was meant to be a rebuttal to Michael Wolff’s Fire and Fury, pitched as by the “family fix-it guy” and titled: “Trump Revolution: From the Tower to the White House, Understanding Donald J Trump. ”

A stung Trump went on a tweetstorm Friday morning, bringing up that book proposal, calling it a “‘love letter to Trump’ manuscript”, and noting: “Written and submitted long after Charlottesville and Helsinki, his phony reasons for going rogue. Book is exact opposite of his fake testimony, which now is a lie!”

Unlike many Republican TV commentators who can wash away past sins about Sarah Palin and the Iraq War – and get a big payday and liberal love – by trashing Trump, Cohen is not destined for reputation rehab.

The problem in a nutshell, as Trump biographer Timothy O’Brien once told The New York Times, was that Michael Cohen wasn’t Roy Cohn. The latter Trump lawyer was the one who helped shape Trump’s character, or lack thereof, drumming in the win-at-all-costs mentality Donald had learned at his father’s knee.

Trump, who once bleated “Where’s my Roy Cohn?” in his anger about Jeff Sessions recusing himself, wanted a lawyer who was whip-smart, amoral, ruthless and predatory. Cohen was merely Renfield to Trump’s Dracula, gratefully eating insects and doing the fiend’s bidding.

The Wall Street Journal reported that Trump showed up late to Cohen’s son’s bar mitzvah and then made a belittling speech about how he had come only because Cohen had begged him and everyone around him. The New York Times revealed last April that Trump had regularly threatened to fire Cohen and quoted Roger Stone saying that Trump mocked Cohen for overpaying for Trump real estate.

With a few exceptions in his inner circle and with family, Trump doesn’t give loyalty or deserve it. That’s why Republicans on the Hill who so obsequiously stand by him will eventually learn it wasn’t worth it, just as Cohen warned them.

Loyalty is a rare commodity in Washington. And Cohen is not the most wretched sycophant in political history. That honour goes to Andrew Young, a slavishly devoted aide to John Edwards during the 2008 campaign who served as a driver, personal shopper, handyman and butler to the North Carolina senator.

When Edwards had an affair with campaign videographer Rielle Hunter and a pregnancy ensued, he persuaded Young to say that he was the father. Edwards also got Young to go on the lam with his wife, who was a nurse, and Hunter and the baby, hiding out in fancy hotels and a posh home near Santa Barbara – an odyssey financed by Young and Bunny Mellon. As Young wrote in The Politician, inside the campaign there was “a cult-like atmosphere” that encouraged extreme sycophancy.

When Trump gave me a tour of his campaign headquarters in Trump Tower in the summer of 2016, he introduced Cohen as “my lawyer”. Cohen looked furtive, standing around with Trump favourites Corey Lewandowski and Hope Hicks and a few young guys at a desk and a whole bunch of Trump portraits and cutouts and a wall with pictures of Trump’s vanquished primary rivals.

It was the least presidential campaign headquarters ever, with the drywall still unfinished in some places. As The New York Times reported, Cohen, who had been pushing for years for Trump to be president, was jealous of the attention the candidate gave Lewandowski.

“He [Cohen] was central casting for Trump Tower but not for 1600 Pennsylvania Avenue,” Trump biographer Michael D’Antonio told me. “The problem is, of course, that much of what burdens Cohen is exactly what Trump liked about him in the past. He was willing to be awful on command and had done so countless times, making countless enemies. As someone who was the target of this behaviour, I can tell you it was so cartoonish as to be ridiculous.”

Everyone is disposable in Trumpworld. They sidelined the fixer. By the time federal prosecutors were investigating Cohen’s hush payments to Trump inamoratas, an adult-film actor and a former Playboy model, Trump was barely speaking to Cohen.

“Boss, I miss you so much,” he said in a rare phone call with Trump, The Wall Street Journal reported. “I wish I was down there with you. It’s really hard for me to be here.”

The yearning was even more palpable than in texts from Jeff Bezos to Lauren Sánchez. The self-styled protector was in purdah and he resented it.

“If Trump was more sophisticated and had the ability to think long-term, he would have anticipated that Cohen might have become a problem if he didn’t hold him close,” O’Brien told me. But Trump isn’t a long-term thinker.

“He’s never had to deal with the people he has faceplanted coming back to haunt him – ever. He’s been doing this to people for decades,” O’Brien said. The difference now? “He never had law enforcement turning people on him and essentially weaponising them against him.”

D’Antonio agreed that “the president made the mistake of disrespecting Cohen because he believed he had purchased Michael and that he would stay bought. When the underdog turns and bites hard, the overdog is always surprised.”

When Trump somehow stumbled into the presidency, he and his family did not think Cohen was up to snuff to come to Washington, much less get some high-level job like chief of staff that he dreamed of. The Journal reported that Cohen and his guests did not even get priority access to the inaugural fetes. – New York Times