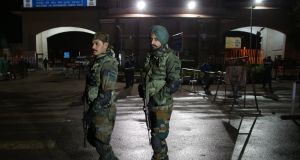 Indian soldiers keeping vigil before the handing over of Indian air force pilot Abhinandan Varthaman at a checkpoint on the Attari-Wagah border on March 1st. Photograph: EPA

The head of India’s air force has declined to give the death toll in strikes it executed against an alleged Islamist terrorist training camp inside Pakistan last week, fuelling doubts over the success of an attack that claims to have killed some 250 militants.

“The Indian air force does not count human casualties; we count what targets we have hit or not,” air chief marshal B S Dhanoa said at a press conference in Coimbatore, southern India, his first after the February 27th air offensive.

“It’s for the government to answer that question,” he added in response to a query on how many members of the Jaish-e-Mohammad (JeM) Islamist militant group were killed in the air assault.

Amit Shah, the head of Indian prime minister Narendra Modi’s Hindu nationalist Bharatiya Janata Party and one of his closet confidants, said 250 terrorists had been eliminated in the attack. He was speaking at public meeting on Monday in Ahmedabad in western Gujarat state.

The government, however, declined to comment on this aspect of the strike, which significantly raised tensions between the nuclear-armed neighbours, after the Pakistan air force retaliated with an attack on a military installation inside Indian-administered Kashmir.

This triggered a dogfight between Pakistani and Indian fighters in which an Indian air force pilot was shot down in Pakistan-administered Kashmir and apprehended by the army. He was freed 48 hours later last Friday following diplomatic pressure from the US, Saudi Arabia and the United Arab Emirates

“No security or defence agencies ever share operational details,” India’s finance minister, Arun Jaitley, said at a high-level conference organised by a local media group on Saturday. The armed forces, he added, must have full leeway in dealing with situations.

Mr Sidhu was referring to opposition charges that Mr Modi had ordered the strikes on Pakistan to boost his image as a forceful and decisive leader in the run-up to general elections scheduled to be held before the end of May.

Meanwhile, the US said it was trying to determine if Pakistan deployed Lockheed Martin F-16 fighters to down the Indian warplane, potentially in violation of the platform’s original sale agreement. The US embassy in Islamabad has declined to comment on or to confirm pending investigations into this matter.

Pakistan has not specified which fighters it used, and could face an adverse fallout if it does transpire that the F-16 was deployed in violation of the US’s End User Monitoring Agreement. This is believed to mandate that the F-16s are for use in counter-terrorist operations and not in conflict with another state.