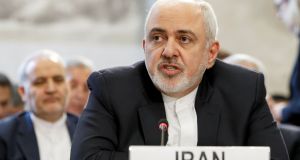 President Hassan Rouhani signalled his support for his foreign minister on Tuesday as Iranian politicians urged Mohammad Javad Zarif to reverse his unexpected decision to resign.

Mahmoud Vaezi, Mr Rouhani’s chief of staff, said on Instagram that the Iranian president was “thoroughly happy” with Mr Zarif’s “intelligent and effective approaches”, as a foreign ministry spokesman stressed that his resignation had not been accepted.

Mr Zarif’s resignation put a spotlight on internal power struggles in Iran as the Islamic republic grapples with US sanctions, which are exacerbating divisions between hardline forces and moderates led by the president and foreign minister.

The foreign minister announced that he was resigning late on Monday – a move that would be a severe blow to Mr Rouhani and regime factions that are battling to keep Iran’s landmark 2015 nuclear deal alive after Donald Trump’s decision to withdraw.

Mr Zarif, a key architect of the nuclear accord, has been leading Iran’s efforts to work with Europe, Russia and China to counter the impact of Trump administration sanctions. But he and Mr Rouhani have faced mounting resistance from regime hardliners who are seeking to consolidate their power and feel vindicated in their criticism of the nuclear deal.

Iran has a tradition of keeping a lid on internal power struggles to prevent foreign rivals from exploiting differences. But the infighting has burst into public view at a time when hardliners in the Revolutionary Guards and the judiciary are increasingly willing to attack Mr Rouhani’s government.

On Tuesday in Tehran, politicians were waiting to see whether Ayatollah Ali Khamenei, the supreme leader, would join those urging Mr Zarif to reverse his decision. “So far 150 members of parliament [out of 290] have signed the petition,” Mostafa Kavakebian, a reformist member of parliament, told local media on Tuesday.

Some members of Mr Rouhani’s cabinet have also urged the minister to stay in his post. Mohammad-Javad Azari Jahromi, telecoms minister, said on Instagram: “Do not sit down brother. Stand up dear Javad! People are worried.”

Speculation was rife in Iran that Mr Zarif’s resignation offer was triggered by anger that he was not informed about a visit to Tehran by Syrian president Bashar al-Assad on Monday. Mr Khamenei and Mr Rouhani received Mr Assad at a meeting, but Mr Zarif was absent. Unusually, Qassem Soleimani, the commander of the Revolutionary Guard’s overseas forces and a powerful hardline figure, was present.

Mr Zarif announced his resignation offer shortly after the meeting in a post on Instagram. “I sincerely apologise people for not being able to continue serving them and for all the shortcomings” during the past 67 months, he said.

The state-run IRNA news agency said on Tuesday that Mr Zarif told colleagues his resignation would help with “restoring the ministry to its legal position in foreign relations”.

A European official told the Financial Times that it would not be “game over” for European efforts to keep the nuclear deal alive if Mr Zarif followed through with his resignation. “The E3’s [France, Germany and the UK] relationship with Iran is not one [person] deep and we remain committed to the nuclear accord,” the official said.

But he added that Mr Zarif was an important interlocutor for “us with bits of the regime we don’t speak to”.

“We didn’t always get all the outcomes we want, or the access we wanted, but we felt we were having an adult conversation with a professional entity, which we don’t always get with the regime and haven’t always had,” the official said.

The foreign minister is a long-term ally of Mr Rouhani and the pair were involved in the first round of nuclear negotiations in the mid-2000s. The president appointed Mr Zarif foreign minister after he won 2013 elections and promised “reconciliation with the world”. A US-educated career diplomat, Mr Zarif became popular at home for his efforts to change Iran’s image and gained respect in international circles thanks to his strong negotiating skills.

But Mr Trump’s decision to withdraw from the nuclear accord has severely undermined the Rouhani government’s key success. Under the agreement, Iran agreed to limit its nuclear activities in return for the economic benefit of many western sanctions being lifted.

The US’s punitive measures have pushed Iran back into recession and heaped intense domestic pressure on Mr Rouhani and his allies. In an interview published in Iran’s Jomhuri Eslami newspaper on Tuesday, Mr Zarif said fighting between rival regime factions was a “deadly poison” damaging foreign policy. The interview was conducted before his resignation, Fars news agency said.

In recent months, Mr Rouhani and Mr Zarif have been locked in a dispute with hardliners over their efforts to ensure Iran becomes compliant with global rules on tackling the financing of terrorism and money laundering.

European officials say the measures are necessary to ensure Europe is able to keep open financial and trade channels with Iran. But regime hardliners fear that the rules will be used to cut Tehran’s funding to its regional allies such as Hizbullah, the Lebanese militant group. – Copyright The Financial Times Limited 2019