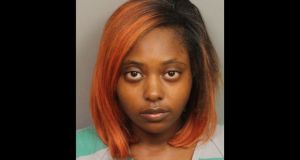 The case of Marshae Jones (above) is a test of a law in Alabama in which voters last November passed a constitutional amendment that gave foetuses the full legal rights and protections of people. Photograph: Jefferson County Jail/Handout/Reuters

Attorneys on Monday said they will seek to get manslaughter charges dismissed against an Alabama woman who was charged because a foetus she was carrying died when she was shot during a December dispute police say she started.

The woman, Marshae Jones (28) was arrested on Wednesday after a grand jury concluded she had intentionally caused the termination of her pregnancy in its fifth month by provoking an argument. The same Jefferson County grand jury declined to bring criminal charges against the woman who shot Jones.

The case is a test of a law in Alabama in which voters last November passed a constitutional amendment that gave foetuses the full legal rights and protections of people. The same principle prompted the state’s Republican-controlled state this year to enact a law banning abortion in all cases, including for pregnancies resulting from rape or incest.

Birmingham attorney Mark White said in a Monday email that he and Jones’s legal team were working on a motion to dismiss the charge.

A grand jury declined to indict the woman who shot Jones, Ebony Jemison, concluding that she acted in self defence during the December 4th altercation in Pleasant Grove, just west of Birmingham, the local district attorney’s office said

“The only victim we have here is that unborn child,” Pleasant Grove Police Lieutenant Danny Reid told WIAT television in Birmingham shortly after the shooting.

The Bessemer Cutoff District Attorney’s office said in a statement last week that it was still considering whether “to prosecute it as a manslaughter case, reduce it to a lesser charge or not to prosecute it.”

The Yellowhammer Fund, an Alabama-based advocacy group that said it is aiding Jones in her defence, posted a statement from White’s law firm on Facebook on Friday saying that Jones, who has no criminal history, lost not only her unborn child but also her job and her house in a fire.

“The unprecedented decisions made in this matter have brought harm to Marshae and to the reputation of the state of Alabama,” the statement from White Arnold & Dowd said. “Our goal is to support Marshae through this process, to vigorously advocate for her exoneration and to ensure that a grave injustice does not occur.”

Jones, who local media said was released on bail late last week, will not be available for questions, the firm said. – Reuters