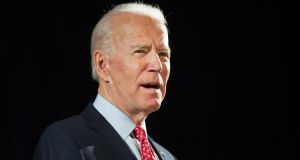 Democrat candidate Joe Biden: supporters point out he is running on a much more progressive platform than is generally thought. Photograph: Tracie Van Auken

This week marked a year since former US vice-president Joe Biden entered the presidential race, launching his campaign in a union hall in Pittsburgh.

Twelve months later, the former senator is poised to become the Democratic nominee, having pulled off one of the most remarkable political comebacks in history. After poor performances in early primaries and debates, his campaign placed all its chips on South Carolina, hoping that the large African-American Democratic electorate in the state would vote for Joe.

It worked. Biden’s decisive victory there on February 29th, followed by a string of wins on Super Tuesday after several candidates dropped out and endorsed him, made him the frontrunner. His political comeback is likely to be studied by political scientists for years to come.

But while the prize may be within touching distance, this week the candidate confronted his biggest challenge yet. Allegations of sexual harassment and assault have resurfaced. Tara Reade, a former employee who worked in Biden’s Senate office in the early 1990s, was one of several women who accused Biden of inappropriate touching when he first announced his presidential bid. She subsequently made a second allegation of sexual assault against him, with three people now saying she told them about the incident.

Facing mounting pressure to publicly comment, Biden gave an interview on Friday to MSNBC host Mika Brzezinski in which he denied the allegations. In a statement, he called on the National Archives to release any complaint they may have from Reade.

Friday’s response may go some way towards alleviating the pressure on Biden about the alleged incident, though he will continue to face calls to open records housed at the University of Delaware.

It also raises questions for Democrats – particularly the prominent female politicians who have endorsed him, some of whom are hoping to become his vice-presidential pick. Given that many said that Dr Christine Blasey Ford should be believed when she accused then supreme court nominee Brett Kavanaugh of sexual assault, the question now is why should the same standards not be applied to Reade.

The allegations have also revived some of the concerns about his candidacy and the wisdom of selecting a white septuagenarian man as the party’s nominee. While Biden’s path to the nomination may be secure, the shortcomings that cast doubt over his candidacy are still there.

His age – he will be 78 on inauguration day if elected – is a cause for concern, as is his ability to compete with Donald Trump on the debate stage. The three presidential debates scheduled to take place in September and October are likely to go ahead without an audience if Covid-19 restrictions still prevail.

The Trump campaign is due to launch TV ads this week, and is likely to ramp up its aggressive digital ad strategy attacking Biden.

Biden’s main challenge may, however, be connecting with more left-leaning parts of the Democratic electorate.

While Bernie Sanders has backed Biden in a bid to avoid the bitter battle between Hillary Clinton and Sanders supporters in the 2016 campaign, signs of tension between the two camps surfaced this week.

The Sanders campaign reacted with fury to a decision by New York to cancel its primary. Sanders had planned to stay on the ballot and pick up eligible delegates who would then represent his supporters at the Democratic National Convention. In something of a peace offering, the Biden campaign agreed a deal with Sanders to allow the Vermont senator to effectively keep some of the delegates he surrendered by suspending his campaign.

Another indication of the continuing energy on the left of the party was a joint proposal by congresswoman Alexandria Ocasio-Cortez and Senator Elizabeth Warren this week to ban certain corporate mergers during the pandemic. The need to connect with more progressive Democrats is one reason why Warren would make sense as a running mate for Biden, though her age may prompt him to opt for a candidate like Kamala Harris or Michigan governor Gretchen Whitmer.

Biden supporters point out that the former vice-president is running on a much more progressive platform than is generally thought. He backs a federal minimum wage of $15 and has moved closer to the Sanders position on student debt, calling for public universities to be tuition-free for students from households under a certain income.

Selling that to the thousands of young people who flocked to Sanders rallies will be his next challenge as he seeks to win the presidency.