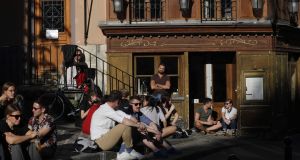 People drink outside a cafe in Paris on May 29th, ahead of the re-opening of the French capital’s cafe terraces, scheduled for June 2nd, as France eases Covid-19 lockdown measures. Photograph: Geoffroy van der Hasselt/AFP/Getty

Coronavirus has infected more than 5.8 million people across the world and killed more than 360,000, according to a tally kept by Johns Hopkins University.

France’s coronavirus deaths rose by less than 100 for the ninth day running on Friday and new confirmed cases slowed again as the country gears up for easing lockdown.

France is to allow restaurants, bars and cafes to reopen from June 2nd - though with more restrictions in Paris than elsewhere - while the government is also lifting a nationwide 100km travel restriction.

Earlier in the day, statistics agency INSEE said fewer people died in France in early May than in the same period the two previous years following high excess death rates during the March-April peak of the epidemic.

The French health ministry said the number of fatalities rose by 52, or 0.2 per cent, to 28,714, the fourth highest in the world.

Both numbers have been on a downward trend since mid-April.

Danish prime minister Mette Frederiksen says her country will reopen its borders next month, with strings attached, to residents of neighbouring Germany, as well as Norway and Iceland, as Denmark accelerates its lockdown easing.

But people from the rest of the world will effectively have to wait until after the summer.

The borders with Germany, Norway and Iceland will open on June 15th but “with restrictions”, Ms Frederiksen told an online news conference Friday, including no stays in the Danish capital, Copenhagen.

And for the rest of Denmark, visitors will have to document that they will stay for at least six nights.

Some of India’s health care system is close to collapse patients share beds in the emergency ward in Mumbai’s Sion hospital.

Patients, many with coronavirus symptoms and strapped two to a single oxygen tank, were captured lying almost on top of each other, top-to-toe on shared stretchers or just lying on the floor, in footage shared on social media in India this week.

Most cases in India are concentrated around its largest cities, including Mumbai and New Delhi, but cases have been increasing in some of the poorest eastern states as migrant workers who lost jobs in the cities return to their native villages.

Mumbai, a city of more than 20 million people, is weeks into the pandemic, but with new cases showing no sign of slowing down the city’s already weak healthcare system appears to be on the brink of collapse. State hospitals such as Sion, overcrowded in normal times, are overrun. With frontline doctors and nurses falling sick with the virus in their droves, it is also leading to a shortage of medical staff.

“The volume and density of our population in Mumbai makes it very difficult to see how we will get out of the other side of this peak,” said Manish Shetty, a doctor who works on the Covid-19 ward in Guru Nanak hospital in Mumbai. “Definitely there is a fatigue setting in from all frontline workers, especially because there is a very high chance of healthcare workers getting infected.”

He added: “There is definitely a shortage of beds for critical care. There is a lot of infrastructure and planning which is happening, but the magnitude of the cases is overwhelming us all.”

It was at Sion hospital that, in footage that went viral a few weeks ago, Covid-19 patients were seen being treated in a ward alongside dead bodies, wrapped in black plastic bags, after the hospital morgue ran out of room.

With 52,667 cases, and 1,695 deaths – nearly a quarter of all Covid-19 deaths in India – the state of Maharashtra, and in particular its biggest city, Mumbai, has emerged as the centre of India’s coronavirus outbreak. According to doctors and officials, the peak began on May 6th, but the curve is showing no signs of flattening, and cases are still doubling every week.

With state-run hospitals quickly running out of beds and keeping symptomatic patients waiting, the Mumbai municipal corporation has raced to convert a series of stadiums and office complexes into coronavirus wards and quarantine centres.

New Zealand has all but eradicated the coronavirus from its shores, with just one person in the nation of five million known to be still infected.

Health authorities have not found any new virus cases for a week. Of the 1,504 people who were infected, 22 have died and all but one of the rest have now recovered.

The nation’s borders remain closed, and staying virus-free when they eventually reopen poses a big challenge.

The Kremlin has praised Moscow’s authorities after the city reported its lowest daily increase in coronavirus infections on Thursday since April 23rd, but some critics raised questions over some of Russia’s reported data.

The wave of infections, the fallout from Russia’s shutdown and low world oil prices have made the coronavirus one of the biggest challenges to Mr Putin in his more than two decades in power.

Authorities reported 8,371 new infections on Thursday, pushing the nationwide tally to 379,051, the world’s third highest after the United States and Brazil. The death toll rose to 4,142 after 174 people died overnight.

The focus of the outbreak has been shifting to Russia’s provinces from Moscow. The capital has been the worst-hit city so far but the number of new cases there fell to 2,054 on Thursday from a peak of 6,703 on May 7th.

Russia’s death toll is much lower than many other countries with similar case totals, something that has been questioned by critics and sparked debate. Authorities defend the figures and say they are more accurate than those of other countries.

The Health Ministry on Wednesday recommended that people who test positive for the virus but who are asymptomatic should not be counted in the national case tally. However, opponents of the Kremlin criticised this approach.

“Why shouldn’t they be included? So as not to spoil Putin’s mood? The statistics should be objective and accurate,” Lyubov Sobol, a vocal Putin critic, wrote on Twitter.

Leonid Volkov, an ally of Sobol, said some of the virus data being reported by Russia’s regions looked statistically dubious. He pointed to the region of North Ossetia, which has reported one-day case rises of between 52 and 78 for nearly three weeks.

Worshippers in Turkey have held their first communal Friday prayers in 74 days after the government reopened some mosques as part of its plans to relax measures in place to fight the coronavirus outbreak.

Prayers were held in the courtyards of selected mosques to minimise the risk of infection.

Authorities distributed masks at the entrance to the mosques, sprayed hand sanitisers, and checked temperatures.

Worshippers were asked to bring their own prayer rugs, but some mosques offered disposable paper rugs that were placed 1.5 metres apart.

The top two divisions of the Swedish football league have been given the go-ahead to start their seasons on June 14.

There will be no spectators.

The season was scheduled to start on April 4 but was suspended because of the coronavirus outbreak.

The government said it has a backlog of nearly 100,000 unprocessed coronavirus tests.

A health ministry statement puts the backlog as of Monday at 96,480.

The ministry says “this challenge is caused by the limited availability of test kits globally.” It says priority is being given to processing tests from patients admitted to hospitals and health workers.

Muslims in some parts of the country attended Friday prayers as mosques closed by the coronavirus for weeks were allowed to start reopening in the world’s most populous Muslim nation.

Worshippers usually pray shoulder-to-shoulder, and they huddle, hug and shake hands once the prayer ends, with cheek-to-cheek kisses common.

Muslims in the Jakarta satellite city of Bekasi were expected during Friday’s prayers to stay at least one metre apart from one another without shaking hands and would hear shorter sermons. No children were allowed to join the prayers, and police and soldiers were there to ensure health protocols such as social distancing and wearing a mask were observed.

President Joko Widodo said his administration wants Indonesia to remain productive economically, but also safe from the virus. He said any measures to start the so-called “new normal” would be based on epidemiological data.

Authorities are relaxing restrictions imposed two months ago to combat the spread of the coronavirus.

Venues allowed to reopen on Monday include cinemas, theatres, zoos and aquariums, but they must limit admissions. Cinemas will be allowed to hold a maximum of 200 people at a time, seated at a safe social distance from each other - with the exception of couples.

Other establishments permitted to reopen include massage parlours, gyms, bowling alleys and sports venues. Commercial passenger flights from abroad remain banned until at least the end of June.

A state government has announced that as many people will be allowed in churches as in pubs after an archbishop complained of unfair pandemic rules.

Sydney Archbishop Anthony Fisher encouraged Catholics to sign a petition calling on the New South Wales government to treat churches the same as pubs by increasing capacity limits from 10 to 50 people beginning June 1.

State premier Gladys Berejiklian announced churches will also be allowed to increase congregation sizes from 10 on Monday in line with relaxed restrictions on pubs, cafes and restaurants.

The government will partially lift its export ban on face masks, allowing domestic companies to sell 10 per cent of their production overseas beginning in June.

At the height of its Covid-19 crisis in March, the country banned the export of masks and channelled most of the domestically made products to pharmacies, where people are currently limited to buying three masks per week.

While the nationwide rationing programme was a drastic attempt at calming public anger over shortages, the supply has now stabilised, with local companies driving up their production capacity to more than 100 million masks per week, food and drug safety minister Lee Eui-kyung said.

South Korea is already in the process of providing one million masks to foreign veterans of the 1950-53 Korean War and 370,000 others to tens of thousands of South Korea-born adoptees living in the West.

The government has again reported no new coronavirus cases or deaths in the country.

Just 70 people remain in hospital for treatment of Covid-19, and another 414 are being isolated and monitored as possible cases or after testing positive without showing symptoms.

The country has reported 57 deaths, its highest single-day increase since the outbreak began.

In the Philippines, president Rodrigo Duterte decided to ease a lockdown in the capital to a more relaxed quarantine on Monday after more than two months of strictures enforced by the police and military.

Infections spiked in Manila recently, and Mr Duterte warned that the pandemic is not over and the quarantine is in place around the country.– Agencies