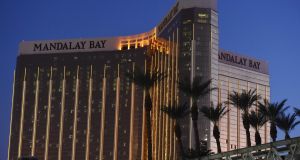 The Mandalay Bay Hotel and Casino, that Stephen Paddock fired from is seen in the evening in Las Vegas, Nevada. File photographL Robyn Beck/AFP/Getty Images

Hundreds of victims of the Mandalay Bay massacre in Las Vegas have been sued by the hotel’s owner in a bid to avoid liability.

MGM Resorts argued in lawsuits filed in Nevada, California, New York and other states that it has “no liability of any kind” to survivors or families of victims under a law enacted after the September 11th terrorist attacks.

The lawsuits target victims who have sued the company and voluntarily dismissed their claims or have threatened to sue.

In the deadliest mass shooting in modern US history high-stakes gambler Stephen Paddock shattered the windows of his Mandalay Bay suite and fired on a crowd gathered below for a country music festival.

He killed 58 people and injured hundreds more before shooting himself.

Attorney Robert Eglet, who represents victims in a lawsuit pending in federal court in Nevada, decried the casino operator’s move, saying the company is filing complaints nationwide in search of a sympathetic judge.

He said he has been flooded with calls from victims.

“This is absolute gamesmanship. It’s outrageous. It’s just pouring gasoline on the fire of (the victims’) suffering,” Mr Eglet said.

“They are very distraught, very upset over this. MGM is trying to intimidate them.”

Victims with active lawsuits against MGM do not face the company’s legal claim.

MGM says the 2002 law limits liabilities when a company or group uses services certified by the US Department of Homeland Security and mass attacks occur.

The company says it is not liable because its security vendor for the concert, Contemporary Services Corporation (CSC), was federally certified at the time of the October 1st, 2017 shooting.

MGM claims the victims — through actual and threatened lawsuits — have implicated CSC’s services because they involve concert security, including training, emergency response and evacuation.

“If defendants were injured by Paddock’s assault, as they allege, they were inevitably injured both because Paddock fired from his window and because they remained in the line of fire at the concert. Such claims inevitably implicate security at the concert — and may result in loss to CSC,” according to the MGM lawsuits.

CSC’s general counsel, James Service, told The Associated Press on Tuesday that it does not comment on litigation involving the company or a third party.

MGM wants a court to declare that the US law “precludes any finding of liability” against the company “for any claim for injuries arising out of or related to Paddock’s mass attack”.

Brian Claypool, an attorney who was at the music festival during the shooting, called the lawsuits a “hypocritical manoeuvre” that will turn into a “public relations nightmare for MGM”.

“We collectively view this as a bullying tactic to intimidate the survivors who are rightfully seeking social change and redress through the litigation process,” Mr Claypool, who represents dozens of victims, said in a statement.

“While we expected the litigation that followed, we also feel strongly that victims and the community should be able to recover and find resolution in a timely manner,” she said in a statement Tuesday.–AP