The 12 boys and their football coach rescued from a flooded cave in Thailand waved, smiled and offered traditional "wai" greetings in their first public appearance since the rescue. Video: Reuters 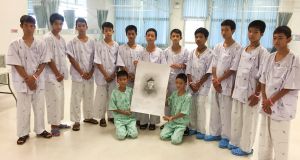 The 12-member “Wild Boars” soccer team and their coach rescued from a flooded cave pose with a drawing picture of Samarn Kunan, a former Thai navy diver who died working to rescue them. Photograph: Chiang Rai Prachanukroh Hospital and Ministry of Public Health/Reuters

It was the moment the world had been waiting for. Fresh out of hospital, the 12 members of the Wild Boars football team and their coach were happy and composed as they stood in front of the international media, just over a week after their dramatic rescue from a cave in northern Thailand caused global euphoria.

The faces of the boys, whose ages range between 11 and 16, showed little trace of their ordeal, in which they were trapped for more than two weeks in a cave with no food and no means of contacting the outside world. It took an international team of divers and experts to eventually find and rescue them , a feat described by one of the boys as a “miracle”.

The Wild Boars coach, Ekaphol Chantawong (25), confirmed reports that the boys want to be ordained as Buddhist monks to honour a former Thai navy Seal who died during the rescue mission. The coach revealed that the boys had dug tunnels of up to 4m in an attempt to find a way out in the days before they were discovered.

“We tried to dig out as we thought we cannot only wait for authorities to get us,” he said.

The press conference was a jovial affair. The boys, dressed in their matching Wild Boars football shirts, entered the packed hall dribbling footballs to loud cheers. They smiled, some widely, some more shyly, at the audience of hundreds who had gathered to hear their account of the drama for the first time.

A video played at the beginning of the press conference showed the boys openly weeping as they thanked the medical staff at the hospital who had helped in their recovery over the past week.

“Everyone was so worried about us,” said 14-year-old Adul Sam-on, looking visibly moved as he stood in his hospital gown in the video. “I’m speechless.”

The coach said they had decided to make the trip to the Tham Luang cave complex on June 23rd as a fun activity because none of them had been inside before.

They cycled there after football practice and planned to spend an hour in the caves but as they reached a junction on the way out, they saw the water rising.

Contrary to earlier reports, almost all the boys can swim and they dived into the pools, testing how deep the water was to judge whether it would be possible to swim out. “Almost everyone can swim,” said the coach. “Some aren’t strong swimmers, however.”

But he said that as it got darker in the cave, the realisation dawned that it would be too difficult for the team to leave. So he took the 12 boys deeper into a place where they could rest for the night, hoping the water level would drop by the morning.

Before they all bedded down in the damp cave on that first night, the coach said they all prayed together.

The team had no food with them and as the days passed with the water continuing to rise, the boys described feeling weaker. They kept hydrated by drinking the water dripping from the cave walls.

“We drank water that fell from the rocks,” said Pornchai Kamluang (16). “On the first day we were okay, but after two days we started feeling tired.”

The team’s youngest member, 11-year-old Chanin Wiboonrungrueng, nicknamed Titan, added: “I had no strength. I tried not to think about food so I didn’t get more hungry.”

While they tried to push away thoughts of food, 13-year-old Panumas Saeangdee started talking about congee, a Thai porridge-like dish, in his sleep. But doctors said all 13 were in good physical and mental health after recuperating in hospital.

It was only after 10 days, when many had almost lost hope of finding them, that two British divers finally came across the boys sheltered on a shelf deep in the cave.

Adul (14) the only member of the team who spoke English, described the “miracle moment” when he heard the two British divers emerge from the darkness and call for the boys. After 10 days trapped in the cave it was the first sign that they would be rescued.

“We were digging stones on top of the hill and we heard voices,” said Adul. “We weren’t sure if it was for real. So we stopped and listened. And it turned out to be true. I was shocked.”

Adul described his surprise to hear the voices calling out in English, rather than Thai. He said the divers asked: “How are you”. To which he had replied “fine” and confirmed that all 13 of them were safe. The divers responded with the word “brilliant” – a moment captured on video, which has been seen around the world.

One of the first questions the boys had for the divers was how many days they had been there, since they had lost all track of the time. “Our brains were very slow,” said Adul. “We had forgotten everything about mathematics.”

They also revealed that the eventual decision about who should leave the cave first was not based on strength, but decided by the boys themselves. It was based on who lived furthest away from the cave and therefore would have the longest cycle back home.

“The ones whose homes are the furthest went first, so they could tell everyone that the boys were fine,” added the coach.

Most of the boys acknowledged they they had not told their parents where they were going after football practice. And they all expressed remorse for what they had put their parents through.

Chanin said he had spent most of his time in the cave worrying that his parents would punish him for disobeying them. Asked whether he thought it was right for him to be punished, he nodded vigorously. “Yes it is,” he replied.

Loud cheers greeted the introduction of the Thai navy Seals involved in the rescue. Their identity has been kept under wraps and they introduced themselves by first names, even donning caps and dark sunglasses to keep themselves anonymous.

The boys demonstrated noticeable devotion towards the navy Seals, who had stayed with them throughout the rescue operation, bringing them food and playing checkers with them, until the last boy was out of the cave.

The boys described the Seals as like family, saying: “We ate together, slept together”. One boy described a Seal as “like my dad”. Several of the boys told the press conference they wanted to become navy Seals when they were older.

It was noted with amusement that one Seal had spent most of the time in just his underwear and a small piece of foil, having stripped off his clothes to give to the boys to keep warm.

“The boys are healthy again,” said one of the hospital doctors. “The hospital staff have been helping to rehabilitate the boys and though they have faced a crisis they have truly been very strong. They are all physically strong now and ready to go back to their lives.”

For the 12 Wild Boars and their coach, it has been an experience that has changed them forever. The boys confirmed that they will be entering into the Buddhist monkhood as a way of paying tribute to the former Seal, Saman Kunan, who died during the rescue operation.

While ordaining as a full monk is an option only available to men over 20, the boys will train as novices and will donate their merit to the memory of Saman, which is the highest honour in Buddhism.

Chanin is among the many boys who now want to be both a professional football player and a Seal when they grow up. “This experience taught me to value my life,” he said. “This event has made me stronger.”

The briefing was tightly controlled, with experts warning of possible long-term distress from the more than two weeks the boys spent trapped inside the cramped, flooded chamber.

The PR department in Chiang Rai solicited questions from news outlets in advance, which were forwarded to psychiatrists for screening.

Thailand’s junta leader, Prayuth Chan-ocha, urged the media on Wednesday to be “cautious in asking unimportant questions”, which could cause distress.

Interest in the saga has been intense, with film studios already considering a Hollywood production of the incident.

The boys will be allowed to go home later on Wednesday. Doctors have advised their families that they should avoid contact with journalists for at least a month. – Guardian