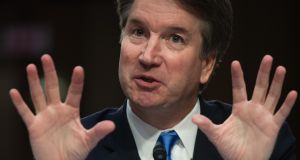 The prospect of a full public hearing into the allegations against Donald Trump’s nominee for the Supreme Court has thrown Brett Kavanaugh’s elevation to the highest court in the land into doubt. Photograph: Saul Loeb/AFP/Getty Images

The woman who has accused Supreme Court nominee Brett Kavanaugh of sexual assault agreed to testify before the Senate on Thursday, setting the stage for a political showdown that could have profound implications for the political hue of the US Supreme Court.

Lawyers for Christine Blasey Ford said on Sunday that their client will testify, following contacts with the Senate Judiciary Committee over the weekend.

“Despite actual threats to her safety and her life, Dr Ford believes it is important for Senators to hear directly from her about the sexual assault committed against her,” said the statement from her attorneys.

However, they noted that the committee had refused to subpoena Mark Judge, a friend of Mr Kavanaugh’s, whom Ms Blasey Ford alleges witnessed the incident at a high school party in 1982. The statement added: “They have also refused to invite other witnesses who are essential for a fair hearing that arrives at the truth about the sexual assault.”

It is expected that Mr Kavanaugh, who strenuously denies the allegations against him, will testify after Ms Blasey Ford.

The prospect of a full public hearing into the allegations against Mr Trump’s nominee for the Supreme Court has thrown Mr Kavanaugh’s elevation to the highest court in the land into doubt.

Mr Kavanaugh, a federal judge who had been nominated by President Trump over the summer to replace retiring justice Anthony Kennedy, had been expected to easily pass his confirmation hearings.

But allegations that he had sexually assaulted Ms Blasey Ford when both were teenagers have threatened to derail the confirmation process.

With Republicans holding only a slim majority in the Senate – 51 to 49 – the stakes of the hearing could not be higher. At least three senate Republicans – Susan Collins of Maine, Lisa Murkowski of Alaska and Jeff Flake of Arizona – have not yet given their endorsement to Judge Kavanaugh.

But some Republicans said they would continue to back Mr Kavanaugh whatever Ms Blasey Ford says this week. “I’m not going to ruin Judge Kavanaugh’s life over this,” South Carolina senator Lindsey Graham said on Sunday. While he said that Ms Blasey Ford “should come forward…should have her say” and would be “respectfully treated,” he said he was not prepared to ruin Mr Kavanaugh’s life “based on an accusation”. “Everything I know about Judge Kavanaugh goes against this allegation,” he said.

Republicans are keen to confirm Mr Kavanaugh’s confirmation ahead of the mid-term elections. Should Democrats win control of the senate, they could block any nomination by the President.

Mr Trump has already sent one conservative justice to the Supreme Court – Neil Gorsuch who was confirmed last year. Mr Kavanaugh was expected to join him, after Justice Anthony Kennedy announced his retirement at the end of the recent term.

Analysis suggests that one of the main reasons Republican voters endorsed Mr Trump as a presidential candidate in 2016 was because of his promise to appoint conservative judges to the Supreme Court and lower courts.

The prospect of a public hearing on Thursday raises memories of a similar controversy involving a Supreme Court nominee in 1991. In the autumn of that year Anita Hill, a former colleague of Supreme Court nominee Clarence Thomas, testified before the Senate Judiciary Committee, accusing Mr Thomas of sexual harassment. Mr Thomas was ultimately confirmed and remains on the bench.

But in the era of #MeToo, Republicans are worried that the committee’s handling of Christine Blasey Ford’s testimony could play poorly with female voters, a key demographic ahead of November’s elections.

While Mr Trump exhibited some restraint last week in his comments about the deepening controversy, on Friday he appeared to question the accuser’s credibility. “I have no doubt that, if the attack on Dr Ford was as bad as she says, charges would have been immediately filed with local Law Enforcement Authorities by either her or her loving parents,” he tweeted.