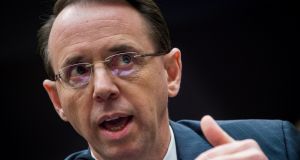 The report, which drew on memos allegedly written by former deputy FBI Andrew McCabe, claims Mr Rosenstein made the suggestion in the spring of 2017, when FBI director James Comey was fired by Mr Trump.

Mr Trump’s son Donald Trump jnr reacted to the reports on Twitter, writing: “No one is shocked that these guys would do anything in their power to undermine @realdonaldtrump.”

In a statement, Mr Rosenstein called the New York Times story “inaccurate and factually incorrect” and said the anonymous sources behind it were “advancing their own personal agenda”.

“But let me be clear about this,” Rosenstein said. “Based on my personal dealings with the president, there is no basis to invoke the 25th amendment.”

The president has consistently argued that the FBI and department of justice have been biased against him. Mr Rosenstein took control of the investigation into alleged collusion with Russia after attorney general Jeff Sessions recused himself from the investigation.

The development emerged among continuing uncertainty in Washington over the nomination of Brett Kavanaugh for the Supreme Court. California psychology professor Christine Blasey Ford has accused Mr Kavanaugh of sexual assault.

Negotiations continued between Ms Blasey Ford’s legal team and the senate judiciary committee on Friday about a possible interview. It was expected that senate Republicans would invite Ms Blasey Ford to testify in Washington next Wednesday.

The committee had originally given her a deadline of Friday to submit written testimony to the committee ahead of a Monday hearing. But Ms Blasey Ford’s lawyers wrote to the committee on Thursday rejecting the idea of appearing on Monday, though they suggested that their client would be prepared to testify some time next week.

“It is simply not possible for her to prepare such testimony while at the same time trying to take appropriate security precautions in the face of the avalanche of threats she has been receiving,” her lawyer Debra Katz said.

Ms Blasey Ford has accused Ms Kavanaugh of sexually assaulting her in 1982 at a house party in Washington DC. Mr Kavanaugh has strenuously denied the claims, but the controversy has threatened to derail his nomination.

The controversy has gripped Washington all week after Ms Blasey Ford went public with her accusations on Sunday. Yesterday, the president of Georgetown Prep, the elite Catholic school attended by Mr Kavanaugh, wrote to parents describing it as a “challenging time” for the school.

As concerns grew among Republicans about a possible delay to the nomination process ahead of the midterm elections in November, the president stepped up his criticism of Ms Blasey Ford, appearing to cast doubt the credibility of her claims.

“I have no doubt that, if the attack on Dr. Ford was as bad as she says, charges would have been immediately filed with local Law Enforcement Authorities by either her or her loving parents,” he said on Twitter on Friday morning. “I ask that she bring those filings forward so that we can learn date, time, and place!”

Mr Trump also reiterated his support for Mr Kavanaugh, describing him as a “fine man, with an impeccable reputation.” He said Mr Kavanaugh was “under assault by radical left wing politicians who don’t want to know the answers, they just want to destroy and delay. Facts don’t matter. I go through this with them every single day in D.C.”

Mr Trump’s comments mark a change in tone from the president, who had refrained from criticising the accuser since she first went public about her accusations last Sunday.

His tweets echoed comments he made in an interview on Thursday with Fox News host Sean Hannity, who broadcast his evening show live from a Trump rally in Las Vegas.

“Why didn’t somebody call the FBI 36 years ago?’” the President said, though he added: “With that being said, let her have her say and let’s see how it all works out.”

However, he also indicated that the nomination process should not be delayed.

“I don’t think you can delay it any longer, they’ve delayed it a week already . . . they have to get on with it.”