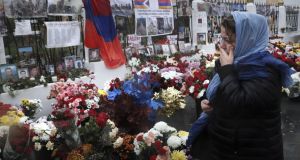 A woman grieves for victims of the military conflict in the self-proclaimed Nagorno-Karabakh Republic in front of the Armenian embassy in Moscow. Photograph: Maxim Shipenkov

Azerbaijan and Armenia have accused each other of wrecking a second bid to halt fighting over Nagorno-Karabakh, as deadly exchanges of artillery fire continued in and around the disputed region in the strategic south Caucasus.

Baku and Yerevan agreed on Saturday night to implement a “humanitarian ceasefire” to exchange prisoners and the bodies of soldiers killed in the worst fighting over Nagorno-Karabakh in 26 years. Just like a similar attempt a week earlier, however, clashes resumed shortly after the start of the supposed truce.

The repeated failure of the Russian-brokered deal, which is backed by the EU and US, has only highlighted Turkey’s role in strongly supporting Baku’s demand for a full Armenian withdrawal from Nagorno-Karabakh, a province of Azerbaijan that has been run by its Armenian majority since a 1990s war that claimed 30,000 lives.

“This is the second time that Azerbaijan violates the ceasefire agreement . . . thus demonstrating to the international community its treacherous nature, which we have been dealing with for decades,” said Armenian foreign ministry spokeswoman Anna Naghdalyan.

In Baku, meanwhile, Hikmet Hajiyev, a senior aide to Azerbaijani president Ilham Aliyev, wrote on Twitter: “In blatant violation of humanitarian truce armed forces of Armenia used their fighter aircraft to bomb the positions of Azerbaijan’s armed forces. How we can trust Armenian side?”

Hundreds of soldiers and dozens of civilians have been killed in a surge of fighting that began on September 27th, and both sides accuse each other of shelling non-military targets.

For the second time in a fortnight, rockets struck a residential district of Azerbaijan’s second city, Ganja, in the early hours of Saturday. Azeri officials said at least 13 people were killed and more than 50 injured in the missile strike.

“Despite the fact that the cowardly, treacherous and vile enemy commits war crimes . . . we must not take revenge on civilians. We are taking revenge on the battlefield. The blood of our martyrs and civilians does not and will not remain unavenged,” the autocratic leader said in an address to his nation.

The EU said that it “deplores the strikes on the Azerbaijani city of Ganja . . . All targeting of civilians and civilian installations by either party must stop. The ceasefire of October 10th must be fully respected without delay.”

Azerbaijan says Turkey must now help resolve the conflict, after three decades of largely fruitless talks co-chaired by Russia, the US and France.

Turkish president Recep Tayyip Erdogan on Sunday accused those three states of siding with Armenia and providing it with “all kinds of weapons support”.

“The West is not on Azerbaijan’s side. It was once again Armenia that violated the ceasefire. Does the West speak up about it? But when Turkey speaks up about it, they complain that ‘Turkey never keeps silent’,” he said.