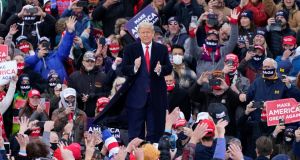 US president Donald Trump heads to the southwestern state of Arizona on Monday, as he predicted “a red wave like you’ve never seen before” at a series of weekend rallies across the country.

At a campaign event in Michigan on Saturday night, Mr Trump told a crowd of thousands of supporters that Republicans were “leading” in the state, despite polls showing his Democratic rival Joe Biden ahead. According to the Real Clear Politics average of polls, Mr Biden is up by 7 per cent in the Great Lakes state.

“We are having these crowds, in all fairness, all over the country... the spirit is so incredible, the enthusiasm,” the president declared at the event in Muskegon, prompting chants of “We love Trump!”

“You’ve got to get your governor to open up your state… and get your schools open,” he said, prompting chants from the crowd of “Lock her up! Lock her up!”

Responding to the scenes at the Trump rally in the west of the state, Ms Whitmer blasted the president, stating that was “exactly the rhetoric that has put me, my family, and other government officials’ lives in danger while we try to save the lives of our fellow Americans”.

Mr Trump won the state of Michigan by just 10,000 votes in 2016 and is hoping to keep the state red again in the election on November 3rd.

Following the event in Michigan, he travelled to Wisconsin, holding an election rally despite a spike in coronavirus numbers in recent weeks. As was the case at the Michigan event, mask-wearing among attendees was sporadic.

The United States recorded 70,000 new Covid-19 cases on Friday – the highest figure since July – as infection rates around the country, particularly in the midwest, rose.

The rally took place in Janesville in Rock County, where Mr Trump had been due to campaign early this month but was forced to cancel because he contracted Covid-19. The county has also seen some of the steepest rise in numbers in Wisconsin in recent weeks, but the president called on the Democratic governor, Tony Evers, to open up the state.

As he addressed supporters at the event on Saturday night, Mr Trump again claimed he was ahead in the state he narrowly won in 2016. Along with his victories in Michigan and Pennsylvania, Mr Trump’s success in Wisconsin four years ago helped deliver him to the White House. But polls currently show him trailing Mr Biden. “I look at a poll. We’re even in Wisconsin. I don’t think so,” he told the crowd who gathered at Southern Wisconsin Regional Airport to hear him.

“Joe Biden is, and always has been, a corrupt politician. The Biden family is a criminal enterprise,” he said, referencing the recent New York Post story about Mr Biden’s son Hunter and a recently discovered laptop that allegedly contained information showing the younger Biden trying to arrange a meeting between his father and a Ukrainian official. The Biden campaign has said no such meeting ever took place.

Mr Trump also told supporters that his decision to serve as president cost him “two, three, maybe more billion dollars”, claiming he would have had “hotels being built in every city in every country in the world” if he wasn’t president.

That followed his suggestion that he could leave the country if he loses in November, a comment he made at a campaign rally in Georgia on Friday night. After describing Mr Biden as “the worst candidate in the history of presidential politics”, he said: “Could you imagine if I lose? I’m not going to feel so good. Maybe I’ll have to leave the country, I don’t know.”

Following his back-to-back events in Michigan and Wisconsin on Saturday evening, Mr Trump flew to Las Vegas where he stayed the night at his hotel in the city. He then attended a church service in the city on Sunday morning, before leaving for a fundraising event in California ahead of a planned rally in northern Nevada last night.

The president’s heavy schedule comes two weeks after he was hospitalised for Covid-19, and in breach of official guidance advising against large-scale gatherings as America continues to battle rising Covid infection rates.

Mr Trump campaigns on Monday in Arizona as a CBS poll on Sunday showed that Mr Biden is leading there by three points, with 50 per cent of likely voters in the traditionally Republican state opting for Mr Biden as president, compared with 47 per cent for Mr Trump.