Senior British minister Michael Gove says the chance of striking a post-Brexit trade deal with the EU has fallen because the bloc has not been willing to intensify talks or produce detailed legal texts. Video: Reuters 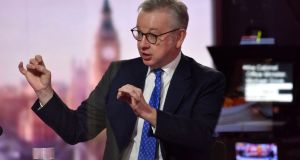 Britain’s chancellor of the duchy of Lancaster Michael Gove speaks during an appearance on the BBC’s Andrew Marr Show in London. Photograph: Jeff Overs/BBC/AFP via Getty Images

British and European Union chief Brexit negotiators David Frost and Michel Barnier will speak by phone on Monday to discuss the structure of negotiations towards a UK-EU free trade agreement after Downing Street said the talks were over. British cabinet office minister Michael Gove said on Sunday that although he thought a deal less likely than before, Britain’s door was ajar for negotiations to continue.

Prime minister Boris Johnson said last week that Britain should prepare to leave the post-Brexit transition period without a deal on December 31st and that the EU must fundamentally change its approach if a deal is to be agreed. Lord Frost spoke to Mr Barnier by video conference as scheduled last Friday and although he rejected a proposal made that morning by the EU negotiator for a face-to-face meeting in London on Monday, the two men agreed to speak by phone.

“As agreed during this week’s negotiations, Michel Barnier held a video conference today with his UK counterpart David Frost to discuss next week’s negotiations. Both chief negotiators agreed to talk again on Monday to discuss the structure of these talks,” Mr Barnier’s spokesman said on Friday.

Britain wants the negotiations to move into a more intensive phase that would see the two sides share legal texts for an agreement. The EU has resisted this until now, insisting that the shape of a deal on fisheries and level playing field guarantees of fair competition must first be visible.

Mr Gove will meet European Commission vice-president Maros Sevcovic in London on Monday as part of the joint committee tasked with implementing the EU-UK withdrawal agreement’s Northern Ireland protocol. Downing Street has made clear that the joint committee’s work will continue regardless of progress in the trade talks and despite the British government’s Internal Market Bill, which would give British ministers the power to override the protocol.

The Bill has passed all its stages in the House of Commons and moves on Monday to the House of Lords, where former Conservative leader Michael Howard, a Brexiteer, is leading opposition to its treaty-breaking clauses.

In a call with business leaders scheduled for Monday, Mr Johnson and Mr Gove will ask them to step up their efforts to prepare for the changes to customs and tax rules that will come into effect at the end of the year whether or not a free trade deal is agreed.

Adam Marshall, director general of the British Chambers of Commerce, said a deal between Britain and the EU would give businesses more clarity so they can plan and adjust.

“Facing the triple threat of a resurgent coronavirus, tightening restrictions and a disorderly end to the transition period, it is little wonder businesses are struggling to prepare. Many firms will be tired of posturing, cliff edges and deadlines, while others are still grappling with fundamental challenges as a result of the pandemic,” he said.

“More businesses will undoubtedly step up preparations for change over the coming weeks, but many are still facing unanswered Brexit questions that have a big impact on their day-to-day operations.”