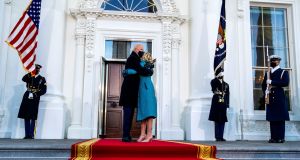 After all the recriminations, the baseless claims of election fraud, the seething anger that culminated in an assault on the US Capitol, America ushered in a new political era on Wednesday.

Shortly before noon, President Joe Biden placed his hand on a family Bible carved with a Celtic cross and took an oath to faithfully execute the office of president.

On the very steps where a militant mob stormed the US Capitol two weeks earlier, a new president preached a message of unity.

“Democracy is precious. Democracy is fragile. At this hour, my friends, democracy has prevailed,” he said, his gentle voice a soothing balm to a nation still shaken by the violent end of the Trump presidency.

All morning, invitees had gathered at the foot of the Capitol, the heavily-armed troops an unsettling reminder that this was an inauguration like no other. Incoming administration officials like secretary of state Antony Blinken chatted to Pete Buttigieg, shortly to become the first openly gay person to hold a cabinet position in America.

Behind them, the National Mall, strangely empty of people, stretched out to the Lincoln Memorial, the symmetrical rows of fluttering flags offering a dazzling display of fortitude.

A brief flurry of snow descended as news rippled through the crowd that President-elect Biden had left St Matthew’s Cathedral and was en route to the Capitol.

By the time Lady GaGa, resplendent in a red skirt, had performed the national anthem, the west side of the Capitol was bathed in sunshine.

History was made as Kamala Harris became the first woman, and first person of Asian and African-American descent, to be sworn in as vice-president.  Fittingly, supreme court justice Sonia Sotomayor, the first Hispanic member of the court, administered the oath.

As Mr Biden began to speak, he did not shy away from the troubles facing the nation. “Few people in our nation’s history have been more challenged or found a time more challenging or difficult than the time we’re in now,” he said. Without mentioning his predecessor, he said “we must reject the culture in which facts themselves are manipulated and even manufactured”.

But he offered a vision of hope, as he spoke of the “uniquely American way – restless, bold, optimistic” and called on his fellow Americans to “set our sights on the nation we can be”.

“We must end this uncivil war that pits red against blue, rural versus urban, conservative versus liberal,” he implored. “We can do this if we open our souls instead of hardening our hearts. If we show a little tolerance and humility, and if we’re willing to stand in the other person’s shoes.”

“There’s no accounting for what fate will deal you,” the new president continued, a nod to his own experience of personal grief, but also perhaps to his own political journey.

Almost 50 years after he first entered the Senate, there was nothing inevitable about a President Biden. Having served eight years as vice-president, and with two unsuccessful presidential bids behind him, many believed he had fought his last political fight.

But, as he said many times, Donald Trump’s comments after the Charlottesville white supremacy march in 2017 prompted him to consider one last run. As he struggled through the early days of the Democratic primary just a year ago, many wondered if Joe Biden was the person for the moment. No one was questioning that on Wednesday.

As the new president and vice-president visited Arlington Cemetery, their first official engagement, they were accompanied by former presidents Obama, Bush and Clinton. Trump’s absence was noted, but not surprising. It seemed that Washington and America had already moved on.

Instead it took the words of 22-year-old Amanda Gorman to capture the fragile state of the country as she closed the inauguration ceremony with a recitation of her poem The Hill We Climb.

“When day comes, we ask ourselves: Where can we find light in this never-ending shade? . . . Somehow, we do it. Somehow, we’ve weathered and witnessed a nation that isn’t broken, but simply unfinished.”