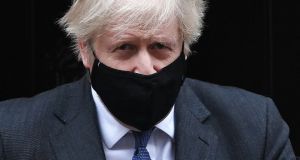 Boris Johnson on Wednesday declared that Britain was ready to quickly deploy tweaked vaccines to combat new variants of coronavirus, as the number of daily Covid-19 deaths in the UK hit a record of 1,820.

The prime minister said he was concerned about the risk posed by dangerous variants of the virus – as well as Britain, Brazil and South Africa have reported new strains – as he justified new border restrictions in the UK.

Neil O’Brien, a Conservative MP, asked Mr Johnson at prime minister’s questions in the House of Commons about “concerning data from South Africa” that the virus could mutate and thus “dodge the vaccines and reduce their efficacy”.

Mr Johnson said he had been discussing the issue over the past few weeks “and also in the past few hours” to make sure any UK regulatory approval for a new form of vaccine could be swiftly given.

“We are confident that the Medicines and Healthcare Products Regulatory Agency will be in a position to turn around new applications for new variants of vaccines, as may be required to deal with new variants of the virus,” he added.

The MHRA said: “We are in discussion with vaccine manufacturers on potential modifications that may be needed for current vaccines to be effective against new variants, if required.”

It said it was seeking expert advice, but added “we can say at this stage that it is unlikely a full new approval process will be needed”.

Mr Johnson was speaking before the UK government reported on Wednesday that 1,820 people had died within 28 days of testing positive for Covid-19.

Although this is the highest figure recorded since the start of the pandemic, it is unlikely to have been the largest daily total because testing was very limited during the first wave of the virus last spring.

The rising number of deaths follows the discovery of a new variant of the virus in the UK last year that prompted a spike in the number of infections, although positive cases are now declining.

Mr Johnson called the latest death toll “appalling”, saying: “There will be more to come. What we’re seeing is the result of the wave of the new variant.”

The government also reported on Wednesday that a total of 4.6 million Britons had now received their first dose of a Covid-19 vaccine.

Ministers have a target of offering a first dose to 15m of the most vulnerable Britons by February 15th.

Mr Johnson told MPs the government was “on track” to meet the pledge but he said it was “very hard” because of constraints on vaccine supply.

Earlier Patrick Vallance, chief scientific adviser, defended Britain’s policy of focusing on giving one vaccine dose to build immunity quickly in people, who then wait three months for a second.

He said Britain would look “very carefully” at new data from Israel which suggested protection provided by the first dose of the BioNTech/Pfizer vaccine was lower than had been found in trials.

However, Sir Patrick said the Israel research studied the effect of the first dose of the vaccine over an initial two-week period, while Britain had focused on data from 10 to 21 days after the jab.

He added the vaccine appeared far more effective in providing protection in the period from day 10 to 21 and beyond.– Copyright The Financial Times Limited 2021