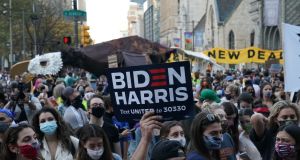 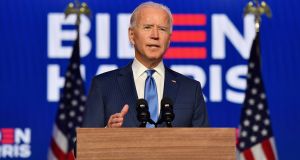 ‘Your vote will be counted. I don’t care how hard people try to stop it’: Democratic presidential nominee Joe Biden at the Chase Center in Wilmington, Delaware. Photograph: ANGELA WEISS/AFP via Getty Images 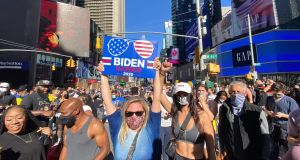 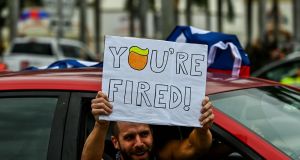 Supporters of the Democratic party show a placard to Trump supporters in Miami Photograph: CHANDAN KHANNA/AFP via Getty Images 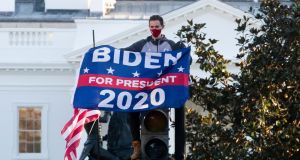 A Biden supporter holds a flag while sitting atop a stoplight with the White House seen behind as thousands of people celebrate Photograph: MICHAEL REYNOLDS/EPA

Former vice-president Joe Biden was declared the winner of the US presidential election on Saturday after clinching the key battle-ground state of Pennsylvania, securing the 270 electoral college votes needed to win the presidency.

The news sparked street celebrations among his supporters in major cities even as president Donald Trump refused to accept defeat. Biden’s win ending four days of nail-biting suspense in a deeply divided countr.

Joe Biden said he was “honored and humbled by the trust the American people have placed in me and in Vice President-elect (Kamala) Harris.”

“In the face of unprecedented obstacles, a record number of Americans voted. Proving once again, that democracy beats deep in the heart of America. With the campaign over, it’s time to put the anger and the harsh rhetoric behind us and come together as a nation.”

Mr Biden is expected to make an address later today in Wilmington, Delaware.

Mr Trump, who was golfing in his golf course in Virginia just outside Washington DC when the race was called, earlier in the morning claimed he had won the election “by a lot”, prompting twitter to label his tweet.

House of Representatives Speaker Nancy Pelosi tweeted: “We kept the republic! Congratulations to Joe Biden on his victory for the soul of our country. “Congratulations to Kamala Harris for making history. It’s a time to heal and a time to grow together. E Pluribus Unum.”

Mr Biden’s victory marks an extraordinary personal and political triumph for a man who, earlier this year, was trailing in the Democratic primary contest. But a decisive win in the South Carolina primary in late February following a string of victories on Super Tuesday, secured his nomination as the party’s nominee.

At 77, Mr Biden will be the oldest US president in history. He is due to turn 78 later this month.

In a statement released through his campaign, Mr Trump, who is golfing in Virginia, accused Joe Biden of “rushing to falsely pose as the winner.”

“The simple fact is this election is far from over. Joe Biden has not been certified as the winner of any states, let alone any of the highly contested states headed for mandatory recounts, or states where our campaign has valid and legitimate legal challenges that could determine the ultimate victor,” he said in the statement.

Americans were waiting longer than in any presidential election since 2000 to learn the winner, with counting slowed by a record number of mail-in ballots. The Covid-19 pandemic prompted many to avoid voting in person on Tuesday’s Election Day.

Mr Trump has filed a raft of lawsuits to challenge the results but elections officials in states across the country say there has been no evidence of significant fraud, and legal experts say Mr Trump’s efforts are unlikely to succeed.

As the news broke, loud cheers erupted in the halls of the hotel where aides to the former vice president were staying.

Mr Biden’s running mate, US Senator Kamala Harris, tweeted a video of her calling Mr Biden to congratulate him: “We did it Joe!” Ms Harris will be the first woman, the first Black American and the first American of Asian descent to serve as vice president, the country’s No. 2 office.

Cheers and applause were heard in neighborhoods around Washington, D.C., with people emerging onto balconies, yelling, honking car horns and banging pots. The wave of noise built as more people learned of the news. Some were in tears. Music began to play, “We are the Champions” blared.

In the Brooklyn neighborhood of Bedford-Stuyvesant, people clapped, and erupted in screams of joy as the news spread. Some residents danced on a building’s fire escape, cheering while others screamed “yes!” as they passed by. In a reminder of the divided state of the country, however, angry pro-Trump “Stop the Steal” demonstrators gathered at state capitol buildings in Michigan, Pennsylvania, and Arizona.

The protesters in Phoenix chanted “Trump won!” and “We want audits!” One speaker told the crowd: “We will win in court!”

The networks’ declaration for Mr Biden came amid internal concerns within Trump’s team about the strategy going forward and pressure on him to pick a professional legal team to outline where they believe voter fraud took place and provide evidence. One Trump loyalist said Mr Trump simply was not ready to admit defeat even though there would not be enough ballots thrown out in a recount to change the outcome. “There’s a mathematical certainty that he’s going to lose,” the loyalist said.

Prior to the election, Mr Trump refused to commit to a peaceful transfer of power if he lost - and he stuck to that approach. He falsely declared victory long before counting was complete.

On Saturday, Trump campaign manager Bill Stepien urged supporters to be ready to attend protests or rallies that the campaign is “propping up around the country,” according to a person familiar with the situation. “Stay at the ready,” Stepien said on a call with Trump allies and surrogates. “At a moment’s instance, we may need your help at protests in your states, to make sure the president is represented and our side of the argument is shown.”

Mr Biden was expected to address the nation after 8 p.m. on Saturday (1 a.m. Sunday GMT) from his hometown of Wilmington, Delaware, according to a campaign aide.

For Biden’s supporters, it was fitting that Pennsylvania ensured his victory. He was born in the industrial city of Scranton in the state’s northeast and, touting his middle-class credentials, secured the Democratic nomination with a promise to win back working-class voters who had supported Trump in 2016.

He launched his campaign in Pittsburgh last year and wrapped it up with a rally there on Tuesday. It was a tight race in industrial states such as Pennsylvania, Michigan, Wisconsin and Minnesota, but Mr Biden did enough to prevail. He faced unprecedented challenges.

These included Republican-led efforts to limit mail-in voting at a time when a record number of people were due to vote by mail because of the pandemic, which has killed more than 236,000 people in the United States.

When Mr Biden enters the White House on January 20th he likely will face a difficult task governing in a deeply polarized Washington, underscored by a record nationwide voter turnout.

Both sides characterised the 2020 election as one of the most crucial in US history, as important as votes during the 1860s Civil War and the 1930s Great Depression. For months, officials on both sides raised the spectre of the United States not being able to pull off a fair vote. In the end, however, voting at the polls proceeded with limited disruption. Thousands of election officials worked for four days under intense pressure, sometimes with partisan supporters protesting outside.

Mr Biden’s victory was driven by strong support from groups including women, African Americans, white voters with college degrees and city-dwellers. He was more than four million votes ahead of Mr Trump in the nationwide popular vote count.

Mr Biden, who has spent half a century in public life as a US senator and then vice president under Mr Trump’s predecessor Barack Obama, will inherit a nation in turmoil over the coronavirus pandemic and the related economic slowdown as well as protests against racism and police brutality.

Mr Biden has said his first priority will be developing a plan to contain and recover from the pandemic, promising to improve access to testing and, unlike Mr Trump, to heed the advice of leading public health officials and scientists. He also has pledged to restore a sense of normalcy to the White House after a presidency in which Mr Trump praised authoritarian foreign leaders, disdained longstanding global alliances, refused to disavow white supremacists and cast doubt on the legitimacy of the U.S. election system.

Despite his victory, Mr Biden will have failed to deliver the sweeping repudiation to Trump that Democrats had hoped for, reflecting the deep support the president still retains. This could complicate

Mr Biden’s campaign promises to reverse key parts of Mr Trump’s legacy. These include deep Trump tax cuts that especially benefited corporations and the wealthy, hardline immigration policies, efforts to dismantle the 2010 Obamacare healthcare law and Mr Trump’s abandonment of such international agreements as the Paris climate accord and Iran nuclear deal.

Should Republicans keep control of the US Senate, they would likely block large parts of his legislative agenda, including expanding healthcare and fighting climate change. That prospect could depend on the outcome of four undecided Senate races, including two in Georgia that will not be resolved until runoffs in January. I

For Mr Trump, 74, it was an unsettling end after an astonishing political rise. The real estate developer who established a nationwide brand as a reality TV personality upset Democrat Hillary Clinton to win the presidency in 2016 in his first run for elected office. Four years later, he becomes the first US president to lose a re-election bid since Republican George H.W. Bush in 1992.

Despite his draconian immigration curbs, Mr Trump made surprising inroads with Latino voters. He also won battleground states such as Florida, where his pledge to prioritize the economy even if it increased the threat of the coronavirus appeared to have resonated. In the end, though, Mr Trump failed to significantly widen his appeal beyond a committed core of rural and working-class white voters who embraced his right-wing populism and “America First” nationalism. - Reuters