Democrat Joe Biden says he is going to win the US presidency as his lead grows over President Donald Trump in Pennsylvania, Georgia, Arizona and Nevada. Video: Reuters 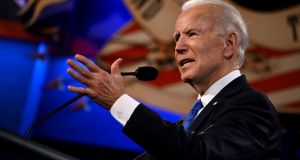 It is set to be third time lucky for Joe Biden, the veteran Democratic politician who failed in attempts to become US president in 1988 and 2008.

At 77 Joseph Robinette Biden jnr will be the oldest man ever elected to the White House. His presumptive election sets another record: his running mate, California senator Kamala Harris, daughter of an Indian mother and Jamaican father, will be the country’s first female vice-president.

Being elected the 46th president of the United States will cap a 50-year career in politics for the Irish-American. He is only the second Catholic to be elected US president after John F Kennedy.

The Pennsylvania-born former senator from Delaware brings to the White House eight years of experience as vice-president in Barack Obama’s government and 36 years in the US Senate.

In a strange campaign disrupted by a pandemic, Biden played up his folksy appeal as “Joey from Scranton”, a blue-collar boy from a working-class industrial area of Pennsylvania, contrasting himself with Donald Trump’s playboy billionaire from Manhattan, whom the Democrat claimed was more interested in the fortunes of Wall Street than Main Street.

A solidly Washington insider, the former senator from Delaware suffered setbacks early in the Democratic primary race for the party’s presidential candidacy by trailing in the Iowa caucuses and New Hampshire primary. His age – he will be 78 on inauguration day – and centrist stance on many issues made him less attractive among the progressive Democratic base of young voters, who have been playing a more vocal role in picking the party’s nominee in the past two election cycles.

Biden ran for the presidency first in 1987, but his campaign faltered when it emerged that he had plagiarised speeches by then UK Labour Party leader Neil Kinnock on the campaign.

In 2008 Biden initially ran against Barack Obama to be the Democratic Party’s presidential nominee before dropping out and joining Obama as his running mate, bringing decades of political experience in Washington to the ticket led by the junior senator from Illinois.

The Democrat considered briefly in 2015 running for the presidency and challenging the then presumptive nominee Hillary Clinton, but the death of his son Beau from cancer turned him against the idea given the emotional toll he faced running a campaign after the bereavement.

It was not the first tragedy in Biden’s life. After his election as senator in 1972, his wife and one-year-old daughter were killed in a car accident that left Beau and his other son, Hunter, badly injured. He considered resigning to care for his sons and recently revealed that he contemplated suicide at the time. He was persuaded by senior Democratic politicians to take his Senate seat and he was sworn in as a senator in 1973 in the hospital room where his sons were recovering.

In February 1988, Biden suffered two life-threatening brain aneurysms, which could have been fatal had he not dropped out of the presidential race five months earlier. He described the scare as an experience that shaped him into the “kind of man I want to be”.

In the Trump era of angry rhetoric and blustering attacks, Biden struck a more empathetic tone in this presidential campaign, referring to his private grief to appeal to voters affected by loss during the coronavirus pandemic, which has cost more than 230,000 American lives. A retail politician to his core, he was often found buying coffees and pastries for members of the public he met on the Amtrak train he took every day between his home in Wilmington, Delaware and his political job in Washington DC.

But behind Biden’s jovial facade is a tough character hardened by years of battle in the political arena. He has had to defend controversial positions taken on various issues over a political career spanning a half-century. The 1994 Crime Bill, which led to mass incarceration, and his 1991 chairmanship of the Senate judiciary committee’s confirmation hearings of supreme court judge Clarence Thomas, who was accused of sexual harassment by Anita Hill, left him facing difficult questions in this recent presidential campaign.

Biden is likely to swing the United States back to a more internationalist approach, rebuilding alliances in Europe and elsewhere after four years of Trumpian isolationism, given the Democrat’s global outlook and his experience as chairman of the influential Senate foreign relations committee prior to becoming vice-president in 2009.

The Democrat may be less globalist on trade than during his time in the Obama White House, taking notes from the Trump playbook and responding to the rust-belt blue-collar workers in the industrial midwest. On the campaign, he pitched a “Made in America” policy to revive manufacturing in the US by threatening to come down hard on companies that ship jobs overseas and reward businesses that create employment at home.

Biden, a proud Irish-American with family roots through Blewitts in Mayo and Finnegans in Louth, will take power at a convenient time for Ireland. He is an opponent of Brexit, in contrast to Trump, and warned last month that there would be no US-UK trade deal if the UK’s exit threatened the Northern Ireland peace process. He will move into the White House just as the economic effects of Brexit are starting to be felt in Ireland.

At the top of his Oval Office in-tray will be trying to figure out a way to unite a very divided country after four years of Donald Trump and two brutal presidential election campaigns that split the country.