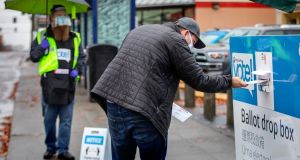 During the night and the morning after the US presidential election this week, my family and friends shot each other text messages, sharing our dismay that American citizens could not emphatically reject a leader like Trump, could not send a message to the world that he did not fulfil the requirements of the office, could not convey that he most definitely did not “make America great again”. What does the election say about us as a people, we asked each other? Have we lost our way so much that so mamy would seek a leader like Trump, even though he did not prevail in the end ?

Trump is himself obsessed with failure and decline, and while others view him as a symptom of that decline, he sees himself as the saviour. Trump’s strategy to restore “greatness” has entailed prioritising the demands of those citizens he feels symbolise American values – and, importantly, who will return the favour with loyalty. This population is largely white, accepting of masculine authority, devoted to free enterprise, protective of individual liberties, and attached to the land, to the exclusion of newcomers upending the social order they want maintained or restored. They subscribe to the words of the American writer Henry David Thoreau, who affirmed in his Essay on Civil Disobedience that “government is best which governs not at all” and declared, “I was not born to be forced. I will breathe after my own fashion.”

In this election, young Americans seized upon a democratic process to alter their life chances

He lost the election, but Trump has in fact shown us how America as a country and society can move forward, though not in the manner he has envisaged. Through his divisive politics, his blatant corruption of the office, and his negligence of inequality, climate change and the pandemic, he has in reality catalysed a resurgent awareness of politics, civic values and human rights; provoked desire for institutional reform; and engendered support for alternative, more consensual and transparent, forms of leadership.

Trump did not notice or perhaps simply not care that by evoking a nativist vision of American uniqueness, he would draw attention to the nation’s founding principles. After all, Thoreau was also referring to the dismantlement of slavery when he championed individual rights in the face of government. Thoreau decried a democracy that granted freedom to some but not to others and wrote that Americans must not look away while they are “sitting upon another man’s shoulders”. Instead, they “must get off him first, that he may pursue his contemplations too”.

Indeed, there are indicators, far away from the White House, that point to how America as a democracy will evolve, even if the vote itself may magnify, at least in the short-term, divisions. The first is the astonishing voter turnout, despite the pandemic, and specifically participation among young people (aged 18-29). Despite international surveys showing young people view democracy with scepticism, the American election revealed that they appreciate the political power voting gives them.

A recent report published by the Centre for the Future of Democracy at Cambridge stated, “Globally, youth satisfaction with democracy is not only declining in absolute terms, but also relative to how older generations felt at comparable stages of life.” The relative disillusionment has originated in part because of the failure of democratic institutions to deliver life opportunities. The report puts it bluntly, declaring, “younger citizens have grown up only in the shadow of democracy’s shortcomings”. Yet, in this election, young Americans seized upon a democratic process to alter their life chances.

American democracy can and will regenerate, in turn manifesting the benefits of this political system for the complicated world in which we live

The second indicator concerns social solidarity. Media attention to the exclusionary, sometimes discriminatory, religious and political beliefs of Trump supporters has obscured action and alliances across ethnic, religious, and racial differences. A recent report on philanthropy in the US during the early months of the pandemic published by the Women’s Philanthropy Institute at Indiana University found that indirect philanthropy, for example “buying local” or paying for services that cannot be rendered, like haircuts, surpassed traditional giving. Moreover, younger households were more likely to participate in this type of giving, suggesting that community represented as much a motivation as assistance during a crisis.

In addition, a recent poll conducted for the Democracy Collaborative by YouGov found that the majority of respondents wanted policies like local economy preservation funds to buy equity stakes in small businesses and prevent the local dominance of multinationals like Amazon. Another poll conducted in 2019 for the Pew Research Centre found that 86 per cent of respondents believed greater interpersonal trust could be achieved and community initiatives could provide a laboratory to overcome social and political tensions.

In my experience conducting research in the UK on charitable responses to austerity, the motivation to sustain communities as well as help others morphs quickly into wanting to influence local politics and reinforce the power of local government to intervene into social problems. Combined with the rise of inequality provoked by the pandemic and lockdowns, the trends suggest that Americans want greater capacity to improve the areas where they live. Critically, this motivation appears to cross partisan divisions, and thus provides the basis for a shared approach to renewing local areas and political advocacy.

After such a bruising and tense election, America may seem to both its citizens and people across the world as irreversibly dissolving into internal factions and cultural fault lines. While certainly some of these divisions have hardened, other, less noticed, grassroots activities and locally focused attitudes intimate at how American democracy can and will regenerate, in turn manifesting the benefits of this political system for the complicated world in which we live. Perhaps, then, future conversations traversing social networks late at night will highlight how America is not declining after all, but rather showing how democracy survives.