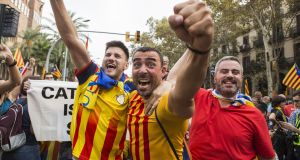 Supporters of Catalan separatism celebrate following the vote to declare independence from Spain by the Catalan parliament in Barcelon. Photograph: Guillem Sartorio/Bloomberg 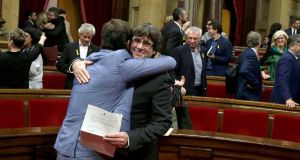 Catalan regional government president Carles Puigdemont is embraced by a colleague after the Catalan assembly approved a declaration of independence in Barcelona. Photograph: Alberto Estevez/EPA

A mighty cheer rose up from the thronging crowd in Barcelona when the Catalan regional parliament passed a historic motion on Friday in favour of independence from Spain.

An eclectic group – there were elderly men and women with walking frames and students with radical socialist flags – they shouted “Liberty” in Catalan and sang songs. Some said they had been waiting all their lives for this moment.

In the parliament, politicians erupted in applause when the measure was passed. The regional president and vice-president, who could now face criminal charges for sedition, shared a rare hug. Catalan MPs – at least those who had not earlier deserted the chamber in disgust at the independence vote – broke into a rendition of Els Segadors, the anthem of Catalonia.

But amid the celebration, there was a sense of unease among separatists outside the parliament. Many were concerned that the declaration – which is illegal under Spanish law and largely symbolic – was going to come at a great cost.

“It is an incredible day, but it is also a very scary one,” said Jordi Bolla, a 63-year-old pro-independence protester standing outside the parliament. “We are entering an uncertain period in our history and it may not end well.”

Marta Rovira, a pro-independence politician, said: “Today we are founding a new country with principles and dignity,” but added: “Difficult times are coming, let’s not fool ourselves.”

The unease is understandable. On Friday, the Spanish senate ratified a series of measures to allow the national government to sack the Catalan government and take direct rule over the region in a bid to “restore legality”.

Known as the “nuclear option”, the measure means that regional ministries and local police will be run from Madrid. The power of the parliament will be curtailed and new elections called in six months.

“We really put our heads in the jaws of the lion,” said Antoni Cera, drinking a can of beer with some friends outside the Catalan parliament. “Or stepped on the snake . . . or whatever is the right expression.”

His friend, Jordi, said he was worried Madrid would never give the power back.

One significant concern for the separatists is that the declaration of independence will turn out to be futile – a purely symbolic act of resistance before Madrid imposes direct rule.

But they are now unlikely to get more time to follow through. Direct rule by Madrid could start this weekend.

It could mean that the economic price paid for the political turmoil over the past month – with a fall in tourist visitors and demand slipping – will be for nothing.

Anti-independence voices in Catalonia, which make up roughly half of the population and are represented by a large minority of seats in the parliament, were quick to condemn the declaration.

Eva Granados, a socialist Catalan politician, said the secession Bill was not only futile but a “monstrosity” that would only lead to more economic woes and social tensions in the region.

Another politician, Carlos Carrizosa, said: “You have driven us to social confrontation, you have divided Catalan society, you have ruined it, and that is how you are going to pass into the history books.”

Pro-independence politicians admit the declaration does not equal genuine independence. But one member of parliament said it was still an important first step towards a Catalan state.

“The declaration does not at all mean that we are independent in practical terms,” he said. “But if we do not recognise our own independence, how can we expect anyone else to?”

Another senior Catalan government figure said: “I always thought that it was not going to be us who really won independence . . . but hopefully we have helped the next guys.”

He pointed to how activists are now preparing a grassroots campaign to resist the imposition of direct rule by Madrid and continue the drive towards independence.

“They can campaign under the banner of a republic now,” he said.

There is talk in some corners of a “Catalan Spring” of resistance to Madrid, which is a worry to the Spanish state. On Friday it began working out how to start imposing direct rule on the region.

Bernat Picornell, a pro-independence Catalan member of the Spanish senate, neatly summed up the mood in Barcelona on Friday, saying the declaration was prompting optimism and worry in equal measure.

“You will understand that it is a day filled with nerves for those of us who have been pro-independence for many years,” he said. “Nerves, but also great hope.” – (Copyright The Financial Times Limited 2017)