Catalonia’s regional parliament declared independence from Spain in a disputed vote that is now likely to be declared illegal by Spain’s constitutional court. 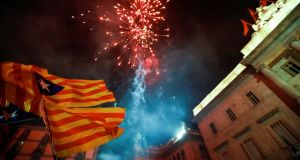 Catalan separatist flags are held up as fireworks go off in Sant Jaume Square in front of the Catalan regional government headquarters during celebratrions after the Catalan regional parliament declared independence from Spain in Barcelona. Photograph: Yves Herman/Reuters 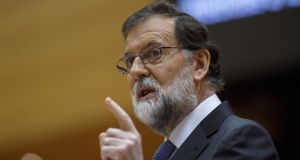 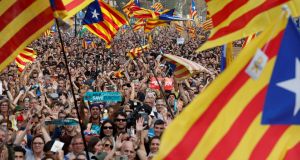 People gather as they watch on giant screens a plenary session outside the Catalan regional parliament in Barcelona. Photograph: Yves Herman/Reuters 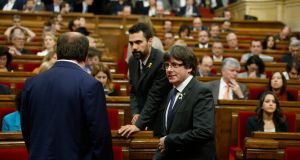 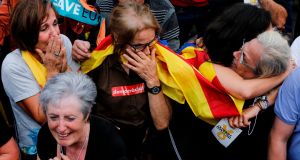 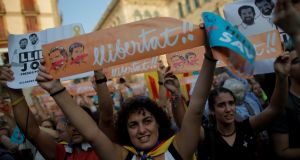 People gather in front of the Catalan regional government headquarters after the regional parliament declared independence from Spain in Barcelona. Photograph: Jon Nazca/Reuters 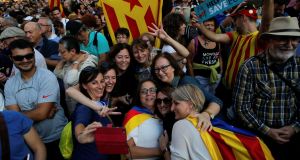 People celebrate in front of the Catalan regional government headquarters after the regional parliament declared independence from Spain in Barcelona. Photograph: John Nazca/Reuters 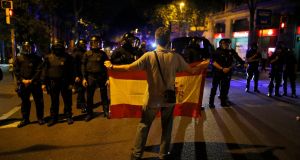 A demonstrator holds a Spanis flag in front of a line of Catalan riot police as anti-independence supporters march against the unilateral declaration of independence approved earlier by the Catalan parliament in downtown Barcelona Photograph: AP Photo/Manu Fernandez

The Spanish government has this evening dissolved Catalonia’s cabinet after the region voted earlier today for independence from Madrid, prime minister Mariano Rajoy said, and elections in the region have been set for December 21st next.

Mr Rajoy said he is also firing the head of the Catalan regional police, shutting down Catalonia’s foreign affairs department and dismissing its delegates in Brussels and Madrid.

He said “we never wanted to come to this point” and the aim is “to return (Catalonia) to normality and legality as soon as possible”.

The government had moved to impose direct rule over Catalonia earlier today, stripping the region of its autonomy less than an hour after its parliament had declared independence in a stunning show of defiance.

Although the Catalan declaration appears to be a doomed gesture, both sides’ moves take Spain’s worst political crisis in four decades to a new and possibly dangerous level.

Spanish prime minister Mariano Rajoy called for calm and said the rule of law would be restored in Catalonia, where secessionists have long cherished the dream of a separate nation.

A crowd of more than 2,000 independence supporters gathered in the Ciutadella Park outside the regional parliament in Barcelona, shouting “Liberty” in Catalan and singing traditional songs as the independence vote went through.

The motion passed in the parliament after a passionate debate from advocates and opponents of independence said Catalonia constituted an independent, sovereign and social democratic state.

Catalan leader Carles Puigdemont left the chamber to shouts of “President!” and mayors who had come from outlying areas brandished their ceremonial batons and sang the Catalan anthem “Els Segadors” (The Reapers).

But immediately after news of the vote, which three opposition parties boycotted, Spanish shares and bonds were sold off, reflecting business concern over the turmoil in the wealthy region.

Within an hour, the upper house of Spain’s parliament in Madrid authorised Rajoy’s government to rule Catalonia directly -- an unprecedented move in Spain since the return of democracy in the late 1970s.

In Brussels, the president of the European Council, Donald Tusk, said the independence vote changed nothing and the EU would only deal with the central government in Madrid.

In Washington, the US State Department said it backed Madrid’s efforts to keep Spain united and Catalonia was an integral part of the country.

Rajoy will convene his cabinet at 5pm Irish time to adopt the first measures to govern Catalonia. This could include firing the Barcelona government and assuming direct supervision of Catalan police forces.

“Exceptional measures should only be adopted when no other remedy is possible,” Spanish primeminister Mariano Rajoy said in an address to the Senate on Friday morning.

“In my opinion there is no alternative. The only thing that can be done and should be done is to accept and comply with the law,” said Rajoy, who has staked out an uncompromising position.

How direct rule would work on the ground - including the reaction of civil servants and the police - is uncertain. Some independence supporters have promised to mount a campaign of civil disobedience.

The main secessionist group, the Catalan National Assembly, called on civil servants not to follow orders from the Spanish government and urged them to follow “peaceful resistance”.

“Tensions are likely to rise significantly over the coming days,” Antonio Barroso of Teneo Intelligence said in a note.

“Demonstrators might try to prevent the police from removing Catalan ministers from their offices if the central government decides to do so. This increases the risk of violent clashes with the police.”

The crisis unfolded after Catalonia held an independence referendum on Oct. 1 which was declared illegal by Madrid. Although it endorsed independence, it drew only a 43 percent turnout as Catalans who oppose independence largely boycotted it.

The crisis has split Catalonia and caused deep resentment around Spain. National flags now hang from many balconies in the capital in an expression of unity.

Catalonia is one of Spain’s most prosperous regions and already has a high degree of autonomy. But it has a litany of historic grievances, exacerbated during the 1939-1975 Franco dictatorship, when its culture and politics were suppressed.

The chaos has also prompted a flight of business from region and alarmed European leaders who fear the crisis could fan separatist sentiment around the continent.

After the debate, lawmakers from members of three main national parties -- the People’s Party, the Socialists and Ciudadanos -- walked out. Members of the pro-independence parties and the far-left Podemos then voted in 70-10 in favour in a secret ballot aimed at hindering any attempt by Madrid to lay criminal charges on them.

The independence declaration called on other countries and institutions to recognise Catalonia, although many, including the European Union, have already made it clear they would not do so.

Montserrat Rectoret, a 61-year-old historian, was among the crowds in Barcelona.

“I am emotional because Catalonia has struggled for 40 years to be independent and finally I can see it,” she said. –Reuters