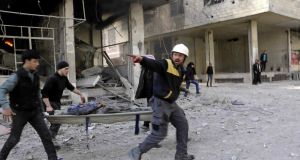 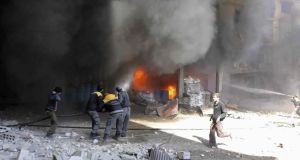 UN human rights chief Zeid Ra’ad al-Hussein attacked what he called a “monstrous campaign of annihilation” on Wednesday against the besieged civilian population of eastern Ghouta in Syria.

“International humanitarian law was developed precisely to stop this type of situation, where civilians are slaughtered in droves in order to fulfil political or military objectives,” he said in a statement.

Information documented by his office alone showed at least 346 civilian deaths and 878 injuries, mostly from air strikes on residential areas, since the Syrian government and its allies escalated an offensive against the rebel-held enclave on Feb 4th.

There were also 15 deaths and 51 injuries reported among civilians in and around Damascus, the result of a dramatic escalation of rebel fire on government areas.

Many of the violations may amount to war crimes, he said. Women and children, trapped for five years of siege, were now in a state of panic, without food, sanitation, or safe havens after air strikes destroyed their homes, Zeid said. “How much cruelty will it take before the international community can speak with one voice to say enough dead children, enough wrecked families, enough violence, and take resolute, concerted action to bring this monstrous campaign of annihilation to an end?”

Residents of Ghouta said they were waiting their “turn to die”, after rockets and barrel bombs fell on the besieged rebel enclave.

At least 10 people died in one village and more than 200 were injured early on Wednesday.

Another 13 bodies, including five children, were recovered from the rubble of houses destroyed on Tuesday in the villages of Arbin and Saqba, the Observatory reported.

The eastern Ghouta, a densely populated agricultural district on the outskirts of Damascus, is the last major area near the capital still under rebel control.

The district, home to 400,000 people, has been besieged by government forces for years.

A massive escalation in air strikes since Sunday has become one of the most intense of the Syrian civil war, now entering its eighth year. The United Nations has denounced the bombardment, which has struck hospitals and other civilian infrastructure, saying such attacks could be war crimes.

The pace of the strikes appeared to slacken overnight, but its intensity resumed later on Wednesday morning, the Observatory said. Pro-government forces fired hundreds of rockets and dropped barrel bombs from helicopters on the district’s towns and villages.

“We are waiting our turn to die. This is the only thing I can say,” said Bilal Abu Salah (22) whose wife is five months pregnant with their first child in the biggest eastern Ghouta town Douma.

They fear the terror of the bombardment will bring her into labour early, he said.

“Nearly all people living here live in shelters now. There are five or six families in one home. There is no food, no markets,” he said.

A commander in the coalition fighting on behalf of president Bashar al-Assad’s government said the bombing aims to prevent the rebels from targeting the eastern neighbourhoods of Damascus with mortars. It may be followed by a ground campaign.

“The offensive has not started yet. This is preliminary bombing,” the commander said.

The Syrian government and its ally Russia, which has backed Mr Assad with air power since 2015, say they do not target civilians. They also deny using the inaccurate explosive barrel bombs dropped from helicopters whose use has been condemned by the United Nations.

Conditions in eastern Ghouta, besieged since 2013, had increasingly alarmed aid agencies even before the latest assault, as shortages of food, medicine and other basic necessities caused suffering and illness.

Eastern Ghouta is one of a group of “de-escalation zones” under a diplomatic ceasefire initiative agreed by Mr Assad’s allies Russia and Iran with Turkey which has backed the rebels. But a rebel group formerly affiliated with al-Qaeda is not included in the truces and it has a small presence there. –Reuters