Cameras outside the International Space Station capture views on August 31 of Hurricane Dorian as it churns over the Atlantic Ocean. The storm has now been classified as a category 5 hurricane with 160 mph sustained winds. Video: NASA 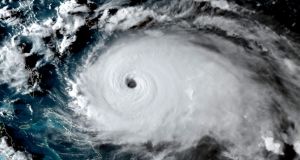 A satellite image obtained from NOAA/RAMMB, shows Tropical Storm Dorian as it approaces the Bahamas and Florida. Photograph: Getty Images 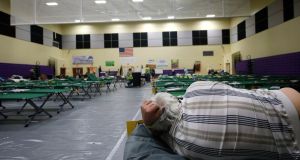 An evacuee lies on a cot at an evacuation shelter for people with special needs, in preparation for Hurricane Dorian, at Dr David L Anderson Middle School in Stuart, Florida. Photograph: Gerald Herbert/AP Photo 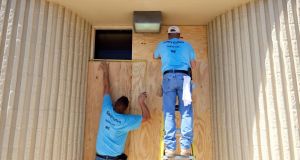 Workers board up the windows of a business in Flagler Beach, Florida, as they prepare for Hurricane Dorian. Photograph: Getty Images 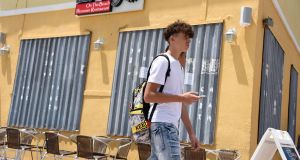 People pass a boarded up business in Hollywood Beach, Florida, as they prepare for Hurricane Dorian. Photograph: Getty Images 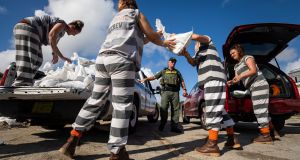 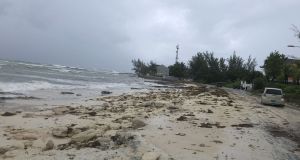 A beach near Nassau, the capital of The Bahamas, as Hurricane Dorian arrives. Photograph: Lucy Worboys/AFP/Getty Images

Henry McMaster’s order goes into effect from noon on Monday, when state troopers will begin reversing lanes so that people can all head inland on major coastal highways.

The order covers nearly one million people, many of whom are evacuating for the fourth time in four years.

Mr McMaster says he knows some people will not be happy having to leave their home. But he says “we believe we can keep everyone alive”.

The National Hurricane Center (NHC) forecasts the centre of Dorian is to stay off shore while paralleling the South Carolina coast starting on Wednesday afternoon. But a small error in the forecast could send the eye and strongest winds into the state.

Earlier, Hurricane Dorian crashed into the Bahamas on Sunday as the second strongest Atlantic storm on record, and inched closer to the United States, with parts of Florida evacuating, and Georgia and the Carolinas bracing for wind and flooding.

The NHC said Dorian made landfall on Elbow Cay in the Abaco Islands as a category 5 storm on Sunday with maximum sustained winds of 295 km per hour and gusts of more than 354 kmph.

It made a second landfall on Great Abaco Island near Marsh Harbor. Millions of people from Florida to North Carolina were bracing to see whether Dorian avoids a US landfall and veers north into the Atlantic Ocean.

Even a glancing blow from one of the strongest storms ever to menace Florida could bring torrential rains and damaging winds, and “a Florida landfall is still a distinct possibility,” the Miami-based NHC warned.

Bahamas residents reported trees snapping and docks being destroyed before the brunt of the storm arrived. The pummelling was expected to last for hours as the hurricane may slow to just 1 mph, “prolonging its catastrophic effects,” the NHC said.

On Great Guana Cay, just off Great Abaco Island, waves began washing over low-lying parts of the tiny 14 km strand of land that is only about 400m wide by mid-morning, resident Tom Creenan said.

Although some residents left for Nassau and elsewhere days ago, some 200 to 300 are riding out the storm on Great Guana Cay, where power was already out and forecasters are predicting up to 61 cm of rain and 6.1 meter storm surges.

After churning over the Bahamas, it is expected to veer northwest toward Florida, with the Miami-based NHC raising its alert on Sunday for parts of the state’s east coast to a tropical storm warning.

With those warnings and the storm intensifying, adjoining Palm Beach and Martin counties issued mandatory evacuations for some residents, including those in mobile homes, barrier islands and low-lying areas. Other counties along the coast have announced voluntary evacuations.

While not expected to strike Florida, the NHC cautioned residents to remain on alert and said “a Florida landfall is still a distinct possibility.”

While Dorian could spare the US a direct impact, the NHC warned the category 5 storm on the five-step Saffir-Simpson Wind Scale would lash millions from Florida to the Carolinas with strong winds and punishing surf.

“This has been a slow-moving storm,” Peter Gaynor, acting Federal Emergency Management Agency (FEMA) administrator, told CNN, adding the hurricane was expected to stall off of West Palm Beach, Florida, on Monday and linger along the US coast until Friday. “This is a serious storm. You can’t take your eye off it. You have to make preparations now.”

Most tourists who planned to leave the Bahamas got out before the main airport closed on Friday night.

Jeffrey Simmons, the deputy director of Bahamas’ department of meteorology, said Dorian will cause prolonged periods of large swells and storm surges along the north coast of Grand Bahama and the north and east coast of Abaco.

Potential damage to the Bahamas from Dorian could be exacerbated by the fact that its westward motion is forecast to slow, keeping it over the islands for longer, the Bahamas National Emergency Management Agency said in a statement.

“I want you to remember: homes, houses, structures can be replaced. Lives cannot be replaced,” he told a news conference on Saturday, adding that 73,000 people and 21,000 homes were at risk from storm surges.

The Irish Department of Foreign Affairs (DFA) advises tourists travelling to the Caribbean region to “exercise due caution and monitor local news and weather reports” in light of Hurricane Dorian’s impending arrival.

In relation to the region’s hurricane season, which runs from July to October each year, DFA says “citizens with plans to be in the affected region during this period should consider the need to travel based on information relating to extreme weather projections”.

“You should pay close attention to local and international weather reports and follow the advice of local authorities.”

As there is no embassy or consulate in the Bahamas, DFA says they are “limited in the help we can offer you in an emergency situation. However, if you need assistance, you can contact the Honorary Consulate in Nassau or the Irish Embassy in Ottawa.”

Aer Lingus flights from Dublin Airport to Miami have been affected by the storm. On Sunday, a flight to Miami scheduled to leave at 3.50pm left early at 1.25pm due to Hurricane Dorian.

The Aer Lingus Miami to Dublin flight on Sunday evening has also been brought forward by three-and-a-half hours, and is due to leave at 7.10pm local time, and land at 7.40am Irish time on Monday morning.

Flights on Monday September 2nd with Aer Lingus in and out of Orlando have been cancelled, with the airline advising travellers to contact them to re-book. - Reuters