What happened to the rest of the Manson Family?

Charles Manson, who has died at 83, led a gang of murderers fiercely loyal to him 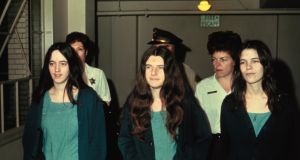 Over two nights in August 1969, Charles Manson’s followers savagely murdered seven people through a frenzied combination of shooting, stabbing, beating and hanging. Their most famous victim was the actress Sharon Tate, the wife of the film director Roman Polanski. She was killed at her house along with four of her guests. The following night, the gang murdered a wealthy grocer named Leno LaBianca and his wife, Rosemary.

At their trial, members of the so-called Manson Family shamelessly admitted their crimes and flaunted their allegiance to a leader whom they said they loved and who was portrayed as controlling their minds. Most of his followers were young women who had fled middle-class and upper-class homes to live with Manson at Spahn Movie Ranch, a mock Old West town near Los Angeles that was once a film set but that had fallen into ruin. One sang in her church choir. Another recalled being enchanted by Manson through what she hoped was a budding romance.

Manson, who died on Sunday, and four members of his “family” were each sentenced to death. In 1972, their sentences were reduced to life in prison when capital punishment was outlawed in California. (It was reinstated in 1978.) This is what happened to some of his most ardent followers.

Susan Denise Atkins was a quiet, middle-class girl who was born in San Gabriel, California, and mostly reared in North Carolina. She has said that her parents were alcoholics and that she was sexually abused by a male relative. She sang in her school’s glee club and in her church choir, but she quit high school and left home when she was 18. She met Manson soon after, and he gave her a new name, Sadie Mae Glutz.

In 1968, she gave birth to a son. Manson – who by all accounts was not the father – had her name the child Zezozose Zadfrack Glutz. The child was eventually removed from Atkins’s care and later adopted. Atkins was arrested in October 1969 in the murder of Gary Hinman, a friend of Manson’s, and convicted. At that point, the police did not know who was responsible for the Tate-LaBianca murders. But Atkins implicated herself in jail, when she is said to have admitted to cellmates that she stabbed Tate, tasted her blood and used it to write “Pig” on the front door of the house.

In prison, Atkins became a born-again Christian in 1974, she wrote in her memoir, Child of Satan, Child of God (with Bob Slosser). She denounced Manson, formed a prison ministry and did charitable work of all kinds. She was routinely denied parole and died at a women’s prison in Chowchilla, California in 2009 at age 61, a year after she was found to have brain cancer.

Krenwinkel was a 19-year-old secretary from Los Angeles when she met Manson at a party. Three days later, she said, she left everything behind to pursue a romantic relationship with him. She said during her trial that at Tate’s home, she chased down Abigail Ann Folger, the heiress of the coffee fortune. “We fought on the grass,” she testified. “I remember stabbing her, stabbing and stabbing.” She said she also assisted in the killings of the LaBiancas the following night. Krenwinkel, now 69, has been in a women’s prison in Corona, California, for about 47 years, longer than any other woman in the state. She has been denied parole at least 13 times. “The saddest part is, my definition of love was totally skewed,” she said in a 2014 documentary, Life After Manson.

Van Houten said she recalled stabbing Rosemary La Bianca in the abdomen 14 to 16 times. She showed little remorse in court as she described wiping away fingerprints and burning the clothing she had worn. She said she remembered taking chocolate milk and cheese from the refrigerator before leaving.

Many years later, Van Houten, calm and articulate, was regarded as a model prisoner at a women’s prison in Corona, California. She said that she regretted taking part in the murders and that at the time she had been mentally ill, a condition exacerbated by using LSD.

“I believed that he was Jesus Christ,” Van Houten said of Manson. “I bought into it lock, stock and barrel.” Van Houten (68) has been denied parole at least 20 times.

Kasabian, who was 20 at the time of the murders, became the prosecution’s star witness and was given immunity. She said that she kept watch on both nights and that she had not participated in the killings. She was raised in New Hampshire and moved to Los Angeles to live with the man she married. She said she joined Manson’s family in July 1969 after feeling rejected by her husband. In her testimony, she said Manson was the devil and that she did not report him to the police because she feared for the safety of her daughter. After the trial, she returned to New Hampshire. She is 68.

Known as Tex, Watson, a lanky, former honor student and high school athlete from Dallas, was said to have led the killing spree as Manson’s assistant after living at Spahn Movie Ranch for parts of 1968 and 1969. After the murders, he fled to his native Texas, where he was arrested, and fought extradition for so long that the other members of Manson’s family were tried without him. When he was finally extradited, he pleaded guilty by reason of insanity from overuse of hallucinogenic drugs, but was deemed fit for trial and convicted of murder.

In recent decades, Watson, now 71, is said to have fathered four children from conjugal visits in prison, and he has founded a prison-cell ministry. He was denied parole for the 17th time in 2016 and remains at Mule Creek State Prison in Ione, California. – New York Times