New York Letter: Writing to prisoners has had a positive impact at a ‘last chance high school’ 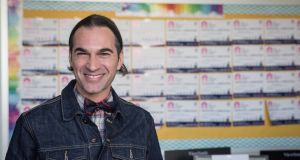 Selena, a 17-year-old from Queens, New York, was surprised when she was asked to write a letter to a prisoner as an assignment during English class.

“Dear friend,” she wrote. “I’m writing this letter to tell you about my life. It’s just like a rollercoaster ride.”

She detailed her grandmother becoming sick; her parents fighting; winding up in hospital after her asthma got bad and nearly dropping out of school.

The letter-writing project was the brainchild of Lee Gabay, a slender, charismatic 50-year-old, who works at the Judith S Kaye High School on Manhattan’s East 96th Street. The building – which acts as a transfer school for students who have had problems with the education system – opened in September 2017.

There are currently 143 students there between the ages of 16 and 21. “A lot of the students have had discontinuations in their education, whether it be incarceration, homelessness, or just dropping out and coming back,” said Gabay. “This is essentially last chance high school.”

Gabay has been teaching for more than 20 years, and has worked inside prisons and juvenile detention facilities. He says he is constantly trying to think of new ways to engage young people.

The high school runs many other programmes, including helping students write songs or plays about their experiences, and bringing in actors to act them out. Another trick is inviting in famous people: Gabay reels off celebrity contacts he’s encouraged to spend time with students, including actors Jesse Eisenberg and Susan Sarandon, writer Luis Rodriguez and former NBA basketball player John Wallace.

Letter-writing helps with grammar, literacy and expression, Gabay said. “When those letters came back [from prisoners] it was Christmas, Hanukkah and Super Bowl Sunday wrapped up in one. It was a big deal. They sat down – which for some students is hard to do. They read the whole thing in its entirety. It empowers the student, it excites them . . . So many good things come from it.”

It is also positive for the prisoners. “To incapacitate them and to leave them there to rot doesn’t benefit anyone,” Gabay said. “Particularly because people do get out.”

Though the letters are screened, the types of insights high school students can get from this type of engagement are deep, students said.

In the first letter she received, Selena said, her pen pal “told me something that woke me up”. The man writing to her said he had been a member of a gang when he was young: coincidentally the same gang her brother is still in.

“For so many years my gang was the most important thing for me, and because of that I’ve suffered a great deal,” the prisoner told Selena. He had already served 18 years in prison for first-degree murder, and had joined a creative writing class there, which is where he began to write to her.

“My brother has been involved for a very long time. He has all the tattoos,” Selena explained. Even now, she said her brother accuses her of taking “the easy way out” by continuing her education, claiming he had no opportunities.

“I’m going to be the first one in my family to graduate and go to college. It feels good and everything but having so much doubt on me from my brother just puts me down and down and down. He’s my blood.”

Though Selena’s cousin was killed by gang members, she said she doesn’t feel able to tell her brother she thinks he should choose a different path. Then she realised she had a chance to quiz the prisoner she was corresponding with about the issue instead.

“It’s really a trip how sometimes it takes a really harsh tragedy in your life before you can really find your purpose,” Selena’s pen pal wrote to her. “It’s always best if you can find your purpose earlier on, but for some strange reason it don’t unfold.”

“That part just spoke to me because I feel I relate to it,” Selena said. “He told me to keep my head up and focus. My strength is myself.”