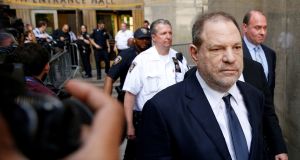 Harvey Weinstein wants jurors to decide whether Chubb Ltd and other insurers are acting in “bad faith” by refusing to pay to defend him against almost a dozen lawsuits accusing him of assaulting or sexually harassing women over four decades.

Mr Weinstein’s lawyers said in court filings on Monday they want an eight-day trial in federal court in Manhattan on the issue of insurers’ refusals to pick up the tab for his defense under policies that exclude coverage for “sexual molestation.” A trial date hasn’t been set.

Chubb, based in Zurich, filed a countersuit against Mr Weinstein and said it won’t pay him to defend against the women’s allegations. Karyn Faggello, a US-based spokeswoman for the company, said Tuesday Chubb doesn’t comment on pending litigation.

The former movie producer, who faces a wave of sexual-assault claims stretching back to the 1970s, was ousted from his studio in October 2017 after the New York Times and the New Yorker published accounts in which women accused him of sexual harassment and rape. He has denied any non-consensual sexual activity.

Actress Dominique Huett claimed Mr Weinstein masturbated in front of her and performed oral sex on her in 2010. She sued his studio for $5 million. Actress Uma Thurman, who starred in hits, such as Pulp Fiction and Kill Bill, has also accused the producer of assaulting her in London in 1994.

Mr Weinstein, whose studio sought bankruptcy protection in the wake of the scandal, was arrested in Manhattan in May on rape charges and released after posting $1 million bail and surrendering his passport. He denied the charges. That same month, his Weinstein Co was sold to Lantern Entertainment in a deal worth about $437 million.

The erstwhile mogul contends in court filings he paid millions to Chubb and other insurers for more than 70 policies purchased to protect against “a wide range of liability”. The companies have ignored his assertions of “non-liability” for the women’s claims “without factual proof necessary to substantiate their refusals to extend coverage.”