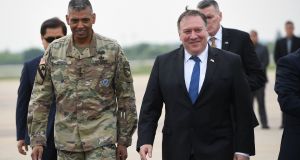 Mike Pompeo said there would be no let-up of sanctions on North Korea until the rogue regime had completed denuclearisation, contradicting Pyongyang’s earlier claims that the US was poised to lift trade curbs.

The US secretary of state made the comments on Thursday after meeting his South Korean and Japanese counterparts in Seoul to brief them of the results of this week’s summit between US President Donald Trump and North Korean leader Kim Jong-un in Singapore.

Mr Pompeo said at a joint press conference that the three countries were committed to complete, verifiable, and irreversible denuclearisation of the Korean peninsula, and stressed that verification was central to North Korea’s denuclearisation.

Mr Pompeo stressed that the North Korean leader understood that denuclearisation should be done quickly and repeated that Pyongyang could obtain relief from tough international sanctions only after its complete denuclearisation.

“We’re going to get denuclearisation . . . only then will there be relief from sanctions,” he said. He said Pyongyang was committed to abandoning its nuclear arsenal but cautioned that it would be “a process, not an easy one”.

But he again bristled at a question about why the summit joint statement did not include the term CVID, repeating that the word “complete” encompasses “verifiable and irreversible”.

There may be very conflicting views regarding the outcome of the summit, but I believe that the most important thing is that the people of the world, including those in the US, Japan and Korea, have all been able to escape the threat of war, nuclear weapons and long-range missiles,” Mr Moon told Mr Pompeo.

Mr Moon’s positive comments came soon after Mr Trump declared that North Korea was no longer a nuclear threat, despite criticism that Mr Trump had failed to secure any concrete steps towards denuclearisation from his meeting with Mr Kim. Mr Pompeo said Mr Trump’s latest remarks were made “with eyes wide open”.

Mindful of growing criticism, Mr Pompeo pushed back on a North Korean media report that Mr Trump had agreed to eliminate sanctions along the path to denuclearisation and that the US and North Korea had agreed to a “step-by-step” process whereby Pyongyang would be rewarded for achieving interim goals along the way – a process that the US previously said was unacceptable.

Asked on Wednesday if the North Korean account of the summit, which was published in a statement by KCNA, a state-run outlet, was accurate, Mr Pompeo said: “One should heavily discount some things that are written in other places.”

Mr Pompeo, who is charged with leading follow-up negotiations with Pyongyang, said a day earlier that he would like to accomplish major nuclear disarmament of North Korea before Mr Trump’s first term ends.

Over the past two days, Mr Pompeo has also rejected suggestions that Mr Trump was outplayed by Mr Kim and that their joint statement amounted to a big concession to North Korea.

US officials have urged people to ignore the omission from the statement of CVID, which the Trump administration had frequently used to define the goal of any potential negotiations with North Korea towards abandoning its nuclear programme.

Pressed on the issue by reporters in Seoul on Wednesday, Mr Pompeo responded: “I find that question insulting and ridiculous and, frankly, ludicrous. I just have to be honest with you. It’s a game and one ought not play games with serious matters like this.” – Copyright The Financial Times Limited 2018