‘Something has broken today’: Anger on streets as Catalans vote 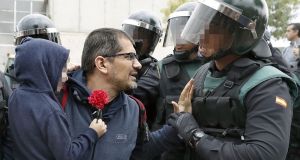 A Catalan man with his child in his arms argues with a Spanish National riot policemen during clashes outside the Ramon Llull school in Barcelona. Photograph: Andreu Dalmau/EPA

Pepa Mainou was the first person to vote in L’Arenal de Llevant school on Sunday morning. She, like dozens of others, had queued outside the building, in Barcelona’s Poblenou district, since 5am. Four hours later, after casting her vote in favour of independence, she was clapped and cheered as she left the building.

“This means a lot to me,” she told The Irish Times. Born in 1935, when Spain was still a short-lived republic, she said she had waited decades for this vote, which offered the possibility of creating a new republican state for Catalonia.

“I only hope everything can be resolved and will be alright,” Mainou added, bursting into tears. “This is important to me, and for my children as well, they’re with me, hoping things will be sorted out.”

Waiting further down the queue to vote was student Pau Stemper, whose quietly-spoken manner hid some strong feelings.

“We’re doing what democracy asks us to do, which is just vote,” he said.

“This is extremely important to me. It’s a change, a kind of peaceful revolution against the Spanish government, which hasn’t been very nice to us in the last few years.”

Schools and other public buildings earmarked as voting stations all had a similar timetable for the day, with the Catalan regional police, the Mossos d’Esquadra, expected to visit each of them soon after 6am. Volunteers overseeing voting in L’Arenal de Llevant repeatedly told those waiting to avoid provoking the police and to remain peaceful throughout the day.

Two Mossos officers visited the school, and talked to representatives of the waiting voters, before agreeing not to shut it down for the day. When that news was relayed to those queuing, there were cheers, followed by the chant “Votarem” – “We will vote”. The two officers stood on a corner away from the voters, looking unthreatening and a little uneasy. Later in the day, the Spanish government would berate the Mossos for allowing voting stations to remain open and “putting their prestige at risk”.

The police “tried to break and enter to get the ballot boxes”, said a medical student called Oriol, who watched as some of his relatives were taken away by the police.

“They were really pushing, it’s something I’ve never seen before. Just talking about it makes me want to cry, so much violence, seeing my uncles getting arrested because they just wanted to vote, it breaks my heart.”

A young man who was visiting Barcelona from Mallorca to follow the referendum was injured in the leg by a rubber bullet while helping another injured man.

“I feel really angry, this is not normal for a democracy,” he told reporters.

“We are only here to help fight for democracy here. It’s the only reason we’re here.”

Inevitably, many Catalans saw the day’s developments as a throwback to the dictatorship of Francisco Franco, who died in 1975. The efforts of the Spanish government and courts in recent weeks to thwart the referendum had already drawn unfavourable comparisons with that regime, particularly on September 20th, when civil guards raided Catalan government premises and arrested officials.

By midday, social media feeds and TV screens were full of episodes of police repression from across the region: an elderly woman bleeding from the head, a policeman dragging another woman by the hair along the ground, a young man being treated after being injured in the face by a rubber bullet. Such images left voters at schools where the national police and civil guard had not yet arrived feeling nervous and angry.

“The feeling is the same everywhere, that something has broken today,” said Xavier Oruna, who voted at Llacuna del Poblenou school.

“It is like, okay, this is not my country, a country I have to hide from because I am putting a piece of paper in a plastic box . . . It’s the same as when Franco was alive.”

He added: “If someone is hitting you every day, what are you going to do? Leave the house.”

The divisive nature of the Catalan independence debate was not only apparent in the behaviour of the security forces. A modestly attended demonstration in favour of Spanish unity was held in Sant Jaume square in Barcelona, where unionists faced off with separatists.

“I don’t know if there is a lot of [police] aggression,” said Immaculada Muñoz, who was at the demonstration.

“There is a lot of provocation towards the police. They aren’t going to declare independence unilaterally as they want to. This is an illegal referendum.”

As Catalan outrage swelled throughout the day and central government officials defended the police’s actions, there was a sense of the rift between Catalonia and Spain, already substantial, widening further.