Giuliani’s arrested associates have tangled past 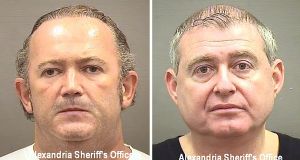 By the time Lev Parnas asked Michael Pues for another $350,000 to salvage a film project that was supposed to include actor Jack Nicholson, Pues was already in for $100,000. Without the new funds, warned Parnas – then a Bentley-driving stock broker – the original investment would be lost.

Eight years later, the film was never made and the money is gone. But Parnas has reappeared. Along with a business partner, Igor Fruman, he has progressed from peddling south Florida investment schemes to become a central link in the impeachment process that is threatening Donald Trump’s presidency.

Both were arrested by the FBI last Wednesday evening at Dulles International Airport in Washington, just before boarding an international flight with one-way tickets.

Parnas and Fruman – and two others – are accused of violating campaign finance laws by channelling money to a congressman in hopes of orchestrating the removal of the US ambassador to Ukraine. They did so, according to the indictment, at the behest of a Ukrainian government official and to further their business interests.

The indictment sheds new light on two denizens of the “Little Moscow” community in North Miami who played a guide-dog role for Rudy Giuliani, the former New York City mayor, in his campaign to dig up dirt in Ukraine on Joe Biden, the former vice-president and Democratic presidential contender.

Parnas, born in Ukraine, and Fruman, a Belarus native, accompanied Giuliani in his capacity as Trump’s personal lawyer on visits with Ukrainian officials.

Numerous pictures show Parnas and Fruman alongside Trump at his private Palm Beach club, Mar-a-Lago, and in Washington. In one image they are seated around a banquette with Donald Trump jnr and friends. They tend to have the unconcealed grins of fanboys who cannot quite believe their luck.

In another photograph from last month, Giuliani and Lev Parnas are seated together at the Trump International Hotel in Washington, having coffee.

“How does Rudy have a coffee-shop relationship with them?” asked one New York political operative of the former prosecutor who once tackled the mafia.

Earlier this year, Giuliani described Parnas and Fruman as “my clients”, although he has declined to provide details as to how they met or the nature of their engagement.

As Parnas and Fruman were being led into a court in Virginia on Thursday, Congress issued subpoenas for records related to their inquiry into whether Trump pressured Ukraine’s president to investigate Biden. The Associated Press and others have also reported that the two men were hoping to leverage their Trump relationships to win lucrative contracts from Naftogaz, Ukraine’s state-owned gas company.

Parnas came to the US when he was three and attended Baruch University and Brooklyn College in New York but never graduated. After working in property, he moved in 1995 to south Florida.

He became a broker, starting his own company and also working with other outfits such as Mammoth Bullion and Monolith Bullion.

It was then that Parnas came into contact with Pues, a veteran whose finances were strained. In 2010, he promised him, according to Pues’s court testimony, that he would “basically double my money”.

When the parties went to court, Parnas testified that he had never been Pues’s financial adviser, but merely gave him advice. He also classified the money as an investment – not a loan.

In 2015, a federal judge ordered Parnas to repay Pues $350,000 – although he has not complied. His own company, Parnas Holdings, is defunct.

With one of his employees, David Correia, Parnas moved on to another venture: Fraud Guarantee, a financial advisory firm that promised clients the security of investing without fear of being defrauded. Correia was also indicted on Thursday.

What brought Parnas and Fruman into Trump’s universe, according to prosecutors, were campaign contributions that started in March 2018. They began attending fundraising events and that May donated $340,000 to two pro-Trump election funds.

The money was funnelled, according to prosecutors, through Global Energy Producers. In vague terms, the indictment describes the funds as coming “from a private lending transaction between Fruman and third parties”.

Some of the money was to further their lobbying campaign to remove Marie Yovanovitch, a US ambassador to Ukraine whom Trump regarded as a foe. Yovanovitch was recalled early from her post.

Some money went to a separate scheme to help a Russia-linked businessman try to win licences to start legal marijuana businesses in New York and Nevada.

But for Fruman and Parnas, their primary focus appeared to be helping Giuliani find evidence against the Bidens. They laid the groundwork for Giuliani’s planned trip to Ukraine in the spring by travelling to Israel to meet oligarch Igor Kolomoisky, who owns the television channel on which Ukraine’s president, Volodymyr Zelenskiy, rose to stardom playing a fictional president.

The men thought Kolomoisky could introduce Giuliani to the new president in the hope he could be persuaded to investigate the Bidens and retain a prosecutor, Yury Lutsenko, widely regarded as corrupt but friendly to their cause.

Kolomoisky rebuffed them. “I told them – read the press, I’ve got nothing to do with Zelenskiy, I’m not going to organise any meetings.”

Parnas and Fruman had more success forging a link between the New York City mayor and one of Ukraine’s most influential religious figures, Rabbi Moshe Azman in Kiev.

Rabbi Azman launched a charity, Friends of Anatevka, to support a settlement near Kiev for Jews affected by the fighting in eastern Ukraine between government forces and pro-Russian separatists. Parnas and Fruman are board members of its US branch. The charity’s executive, Michael Kolden, said he had never met them.

In a video from last year obtained by the Jewish Insider news site, Giuliani – huddling with Parnas and Fruman – films a video greeting for the rabbi. “Moishe! How are you, baby?” asks a smiling Giuliani, tie undone. “I can’t wait to come back,” he adds, flashing a thumbs-up.

In May, when the hunt for evidence against Biden in Ukraine was in high gear, the trio flew to Paris, where Giuliani met with Rabbi Azman. A photograph from that meeting shows the two men sitting in a garden, enjoying cigars.

“I have a very good relationship with Giuliani and President Trump,” Rabbi Azman told a Ukrainian website in August. He praised Parnas and Fruman as Giuliani’s “closest assistants” while lamenting their failed attempt to win him an audience with Ukraine’s president.