Travellers from the US are being turned down by Schengen Area countries as it continues to be the worst hit country by Covid-19 in the world. Video: Reuters 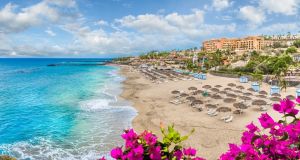 Approved destinations pose “a reduced risk to the public health of UK citizens” but the list will be kept “under constant review”, the Department for Transport said. Photograph: iStock

Britain has published a list of countries to which people can travel without facing quarantine when they return to England. But Scotland, Wales and Northern Ireland have not agreed to lift the quarantine rules and the plan has been criticised as “shambolic”.

Boris Johnson’s government promised weeks ago to establish reciprocal “air bridges” with countries where coronavirus is under control. But the list of 59 countries and 14 British overseas territories includes countries that are still requiring visitors from Britain to quarantine.

Visitors from Ireland have always been exempt from British quarantine rules because of the Common Travel Area, although people arriving in Ireland from Britain are required to self-isolate. The list published on Friday includes many popular holiday destinations but does not include the United States, China, Russia or Brazil.

“Instead of quarantining arrivals from the whole world, we will only quarantine arrivals from those countries where the virus is, sadly, not yet under control,” the prime minister told a press conference in Downing Street.

Scotland’s first minister Nicola Sturgeon said the British government had given the devolved administrations insufficient notice of what it was planning, making it impossible to devise a policy for the whole of the United Kingdom.

“The list of countries that they were yesterday demanding that the Scottish government signed up to and suggesting that we would have a barrier to getting agreement on, is not the same as the list that they have shared with us today. So, we need as the Scottish government to analyse these proposals properly, and rationally, and we need to do that, obviously from a public health perspective,” she said.

“But we also need to do that from a legal perspective. All of these decisions are of course potentially open to legal challenge. And when so much is at stake as it is right now, we can’t allow ourselves to be dragged along in the wake of another government’s, to be quite frank, about it, shambolic decision-making process.”

Saturday sees a further easing of the lockdown, with bars, restaurants, museums, hairdressers and other facilities allowed to reopen. Pubs will be allowed to open from 6am but Mr Johnson urged people to use their restored freedom responsibly.

“As lockdown eases, we should focus on supporting the livelihoods of business owners and their employees up and down the country – all of whom are opening their doors for the first time in more than three months. They are our local restaurants, hairdressers, libraries, museums, cinemas, and yes, pubs. They are also hotels, B&Bs, indeed much of our tourism industry,” he said.

“All these businesses and their workers have put in a heroic effort to prepare their venues for this reopening, to work out a way to trade in a way that keeps their customers safe. But the success of these businesses, the livelihoods of those who rely on them, and ultimately the economic health of the whole country is dependent on every single one of us acting responsibly. We must not let them down.”