Ghislaine Maxwell, British socialite and close friend of the convicted sex offender Jeffrey Epstein, was arrested by the FBI in New Hampshire on Thursday and charged with procuring and transporting minors for sex acts. Video: Reuters 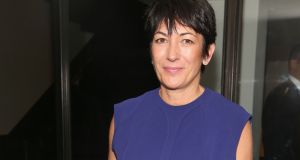 Ghislaine Maxwell, the long-time associate and former girlfriend of the disgraced late billionaire Jeffrey Epstein, was arrested in New Hampshire on Thursday, charged with helping Epstein to sexually assault and abuse multiple minors.

Ms Maxwell was arrested by the Federal Bureau of Investigation (FBI) at 1.30pm Irish time in a 156-acre property in rural New Hampshire. She was charged with six crimes, including enticing minors to travel to engage in illegal sex acts and two acts of perjury.

Ms Maxwell was taken into custody and appeared by video link before a federal court. The judge in the case ordered her to the custody of US marshals and her case was transferred to the Southern District of New York, which brought the charges. She did not enter a plea during the short initial court appearance. Prosecutors said she was an “extreme flight risk” and had tried to avoid detection.

The youngest daughter of British publishing magnate Robert Maxwell, 58-year-old Ms Maxwell had a long association with Epstein and was named by the billionaire’s accusers last year in a high-profile case which led to his indictment.

Her arrest came almost a year after Epstein was charged with sex-trafficking of minors. He died by suicide while awaiting trial in a New York prison last August.

The indictment filed on Thursday alleges that Ms Maxwell “assisted, facilitated, and contributed to Jeffrey Epstein’s abuse of minor girls by, among other things, helping Epstein to recruit, groom and ultimately abuse victims known to Maxwell and Epstein to be under the age of 18”.

Four of the charges relate to incidents that occurred between 1994 and 1997 while two relate to allegations of perjury dating from 2016.

Announcing the charges against her, the Southern District of New York acting attorney Audrey Strauss said that Ms Maxwell had a “personal and professional relationship with Jeffrey Epstein” from 1994 until at least 1997 and helped him exploit girls as young as 14 years old. She said that Ms Maxwell and Epstein had a method whereby they would identify and befriend young girls. She would pretend to be a woman they could trust, “all the while, she was setting them up to be sexually abused by Epstein. And in some cases by Maxwell herself . . . Maxwell played a critical role in helping Epstein to identify, befriend and groom minor victims for abuse,” said Ms Strauss. “In some cases Maxwell participated in the abuse herself.”

The prosecution said the government had identified 15 different bank accounts linked to the defendant from 2016 to the present, with total balances ranging from hundreds of thousands of dollars to more than $20 million.

Ms Maxwell is understood to have been living in the house in New Hampshire, which was bought by cash in December 2019, for several months and was being monitored by the FBI before her arrest.

Ms Strauss also urged Prince Andrew, a former acquaintance of Epstein’s and Ms Maxwell, to co-operate with their investigation.

“We would welcome Prince Andrew coming in to talk to us. We would benefit from his statement,” she said.

Ms Strauss’s predecessor, Geoffrey Berman, who was fired by President Trump last month, accused the Duke of York of failing to co-operate with investigators, a claim Prince Andrew denies.