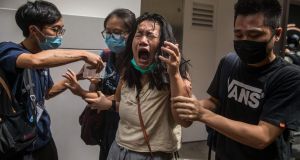 A woman reacts after she being hit with pepper spray deployed by police against protesters in Hong Kong on Wednesday. Photograph: Dale de la Rey/AFP via Getty Images

China has warned Britain it would retaliate if London goes ahead with a plan to offer a pathway to citizenship to up to 3 million Hong Kong residents in response to a sweeping new national security law.

The move to upgrade the status of Hong Kong’s British national overseas (BNO) passport holders to facilitate citizenship has enraged Beijing, which says the UK is breaking its pre-1997 handover commitments.

“If the British side makes unilateral changes to the relevant practice, it will breach its own position and pledges as well as international law and basic norms governing international relations,” the Chinese embassy in London said in a statement posted on its website.

“We firmly oppose this and reserve the right to take corresponding measures,” the statement said, without offering further details.

The British move came after Beijing imposed a new national security law on Hong Kong this week that has been widely criticised for stifling the city’s political and social freedoms and undermining its independent judiciary.

In a scathing analysis of the new legislation released on Thursday, Hong Kong’s Bar Association said the offences were “widely drawn” and were “capable of being applied in a manner that is arbitrary, and that disproportionately interferes with fundamental rights, including the freedom of conscience, expression and assembly.”

British foreign secretary Dominic Raab said that while his government was intent on pressing ahead with the plan to expand the rights for BNO holders, there was little assistance they could lend if China tried to block Hong Kongers from leaving their city.

“Ultimately if they follow through on something like that there would be little that we could do to coercively force them,” he said on ITV’s Peston show.

“I wouldn’t want to be naive about this. I think we need to be realistic,” he said. “But I do think that China as a rising, leading member of the international community is sensitive to the reputational risk in all of this. But clearly not sufficiently that it hasn’t proceeded anyway.”

A Hong Kong legal expert said that as the situation stands it would be difficult for China to stop people leaving Hong Kong.

“Even if they blocked people leaving on BNO passports, almost all of them would have another travel document that they could leave Hong Kong on. They should be able to fly out on that if they wanted,” the expert said, who asked not to be named.

While up to 3 million of Hong Kong’s 7.4 million citizens will be eligible to move to the UK and pursue citizenship under the new policy, there is as yet no indication as to how many might want to take up the option.

The row threatens to seriously damage Sino-British ties, with relations a far cry from the “golden era” the two countries hailed just five years ago. Speaking in Beijing on Thursday, Chinese foreign ministry spokesman Zhao Lijian said “the UK has to bear all the consequences of this”.

Britain is not the only country to develop plans to offer Hong Kong residents a safe haven amid growing concerns for the city’s political future.

On Thursday, Australian prime minister Scott Morrison said his government was “prepared to step up and provide support” to Hong Kong citizens and was “considering very actively” proposals to offer them visas.

Australia’s move follows a request from London to the other members of the “Five Eyes” intelligence network – the United States, Canada, Australia and New Zealand – for “burden sharing” if there was a mass exodus from Hong Kong.

Taiwan has already opened a dedicated office to assist Hong Kongers who want to flee the city, while US legislators are preparing a bipartisan proposal to offer sanctuary.

On Wednesday, Hong Kong police made the first 10 arrests under the new law – including for carrying flags, banners and leaflets calling for Hong Kong independence and for chanting pro-independence slogans.