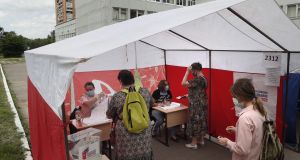 Russians voting at a street polling station in Podolsk outside Moscow in the referendum on amendments to the constitution. Photograph: EPA/Maxim Shipenkov

Russia is poised to allow president Vladimir Putin to rule until 2036 following a controversial plebiscite on constitutional amendments that critics denounced as a sham.

Opponents of the changes – who said the vote was a Kremlin-run farce with a pre-determined outcome – were further outraged on Wednesday afternoon when Russia’s central election commission announced provisional results several hours before polling stations were due to close in much of the country.

The commission said that with 5.3 per cent of votes counted, more than 69 per cent backed the amendments and that turnout was 63 per cent.

Mr Putin, his political and celebrity supporters and dominant pro-Kremlin media argue that the raft of constitutional changes will strengthen Russia’s democracy, improve the lot of workers and pensioners and enshrine conservative values by effectively banning same-sex marriage and protecting a “patriotic” view of the nation’s history.

They have made hardly any mention of the most eye-catching amendment, however, which would “reset” term limits for Mr Putin – Russia’s ruler as president or prime minister for the past 20 years – and allow him to run for another two six-year terms after his current mandate expires in 2024.

He has not revealed whether he plans to extend his rule, but said recently that failure to make such an option available could see government operations disrupted “in about two years ... by people looking around for possible successors”.

On Wednesday’s final day of voting, Russians with children received a one-off state handout equivalent to about €125. Throughout the seven-day process people were encouraged to vote by the chance to win flats, cars and other prizes in lotteries that were only open to those who had cast their ballot.

Boot of a car

Russian social media has been rife with photographs and videos of polling stations operating in unlikely settings – such as courtyards, the stairwells of apartment blocks, park benches and even the boot of a car – without any independent monitoring.

“It’s incredibly infuriating that the central election commission... is intentionally trying to show that it spat on the law,” opposition activist Alexei Navalny wrote on Twitter after preliminary results were released.

“They made a fake vote and now they announce the results of it even though in the part of Russia where 85 per cent of the population lives polling stations will be open for several more hours. Their place is in the dock [of a courtroom]