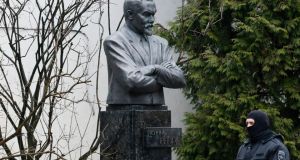 A Russian policeman passes a bust of Yuri Roerich, son of artist and theosophist Nikolai Roerich, at the International Roerich Centre in Moscow, during a raid in which investigators took away more than 200 paintings as well as precious objects and memorabilia. Photograph: Sergei Ilnitsky/EPA

Staff at the International Roerich Centre in Moscow tend to be a peace loving, mystical lot, but since their wealthy sponsor vanished five years ago they have faced a hair-raising battle for control of the palatial museum and its treasure trove of artworks.

Things came to a head at daybreak on Tuesday when masked Russian police swarmed into the garden outside the museum and cordoned the building off. Then came a large group of ministry of interior officials who launched a search of the museum, parcelling up large numbers of valuable exhibits.

Museum employees put up a brave fight against the operation, forming a human chain at the gate and demanding to inspect the contents of all vehicles leaving, but to no avail. Eyewitnesses said investigators carted away more than 200 paintings as well as precious objects and memorabilia.

Officials had forced their way in to the museum and “simply gathered up paintings”, the museum’s director Pavel Zhuravkin told Open Russia. “Never before have the doors of a museum been broken down in Russia,” he added.

The International Roerich Centre is a showcase for the works and teachings of Nikolai Roerich, a Russian artist, theosophist and archeologist who left his hometown of Saint Petersburg after the 1917 Bolshevik revolution and spent many years exploring oriental culture in India and central Asia.

The police raid marks a turning point in a protracted battle between Russian authorities and staff at the centre, who say the museum is the target of a state-sponsored takeover. As often happens in Russia under Vladimir Putin, powerful state institutions have waged war on it with a combination of scare tactics, law suits, financial penalties and bullying.

For many years the museum enjoyed the protection of Boris Bulochnik, a reclusive Ukrainian-born banker and an ardent fan of the “Master”, as Roerich followers call him.

Bulochnik invested millions of dollars restoring the ruined mansion that housed the Roerich centre in central Moscow and topped up its collection with paintings purchased overseas. But when his Master Bank collapsed in 2013 with a €1 billion hole in its coffers, he fled Russia, leaving his pet project to fend for itself.

In a statement on Tuesday the Russian interior ministry said it had seized artworks at the museum in connection with an embezzlement case involving Bulochnik, who is now on an international wanted list. Roerich paintings brought from New York to Moscow by Bulochnik were paid for with funds siphoned off from Master Bank, the ministry claimed.

Not true, says Alexander Stetsenko, deputy chairman of the museum, who believes Russian investigators have fabricated the charges to blacken Bulochnik’s name. “We’re talking about a big Russian oligarch who instead of buying yachts and clubs promoted a philanthropic, cultural endeavour,” he told The Irish Times.

Art experts say that if Russian state insurers plan to sell the confiscated paintings to recoup Master Bank’s debts, there will be no shortage of potential buyers. “Roerich has a wide international appeal” and is “one of the more expensive Russian artists today”, says William MacDougall, director of MacDougall Auctions, a firm that specialises in Russian art. “Not just Russian, but also American and European collectors fight to acquire his most important pieces.”

But where does that leave the Roerich centre?

Losing some of the collection is unfortunate, but not the worst of the museum’s problems, according to Stetsenko, who believes the Russian authorities’ overarching plan is to redistribute all the museum’s assets and close the foundation down.

Certainly, the museum has powerful enemies at the Russian ministry of culture, which participated in the investigation on Tuesday. Since Bulochnik disappeared, the ministry has initiated a cascade of law suits against the centre, ranging from charges of propagating extremism to tax avoidance to failure to maintain its heritage buildings.

It doesn’t help the museum’s cause that the highly conservative Russian Orthodox Church categorically rejects Roerich’s philosophy, seeing his spiritual teachings of living ethics – or agni yoga – as incompatible with Christianity. Recommending living ethics is comparable to advising “a patient to be treated with potassium cyanide”, Archbishop Dmitry Smirnov has warned.

But in the end this is a fight defined more by money than philosophy. The museum is paralysed by debt, says Stetsenko. “We don’t have enough money to defend ourselves in court, we can’t even pay salaries.”