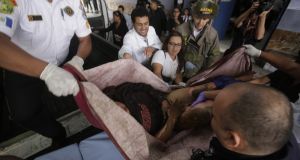 Volunteer firefighters rescue a girl from a fire at a children’s shelter in Guatemala City. Photograph: Danilo Ramirez/AFP/Getty Images

At least 19 people were killed in a fire on Wednesday in a Guatemalan home for abused children, a spokesman for firefighters said.

The Virgen de Asuncion home is in the municipality of San Jose Pinula, some 25km southwest of the capital Guatemala City and houses children of up to 18-years-old.

Oscar Franco, spokesman for the voluntary firefighters, told reporters that 19 people had died and at least 25 had been injured in the blaze.

Guatemalan media said that, on Tuesday, about 60 minors had escaped from the home, which takes in children who have been the victims of abuse and trafficking or abandoned.

Local media also said 540 children live in the home, despite the fact it only has the capacity to hold 400.